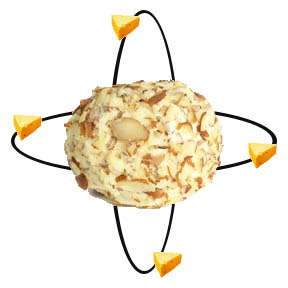 The nucleus of the Europium atom is made of Swiss cheese.

Europium, discovered in the aftermath of a misguided post-World War 2 experiment on Francium-Germanium collisions as neutrally observed from CERN Switzerland, is a notoriously unstable element. It's also a lot like opium.

Unique in that its atomic number keeps increasing, Europium has most recently been observed transitioning from 15 to 25 in May 2004.

Intellectual proprietary rights to europium are controlled by the Brussels-based European Common Market; this may account for Europium's unusually-dense structure. A Europium atom, composed mostly of neutrons and inert matter, is therefore sadly prone to decay into various equally-dense isotopes of Administratium.

The atomic symbol for europium is €. The only known antidote for exposure to europium is americium.