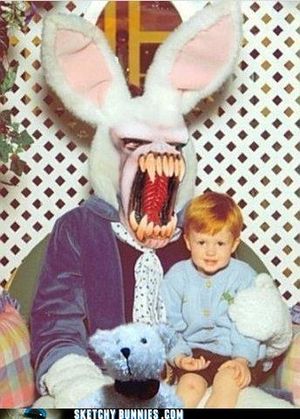 Known for a perverse sense of humor, many monster bunnies like to materialize out of thin air, replacing mall Easter Bunnies for long enough to get a reaction from the kid on his lap. Hilarious.

An average Monster Bunny is a predator without conscience, a terrifying, ravenous carcass-tosser with no care for anybody's feelings but their own. Needless to say, they are best avoided in most circumstances. They are fiercely territorial creatures with special blood lust for rival mating partners. Known to serve revolting cakes with tea, they are best approached on dark nights as they have truly terrible vision all around.

Monster Bunny was also the name of a doggie toy belonging to Evelyn The Modified Dog. It was a bit fearsome, but since it was an inert plastic toy, it was relatively harmless.