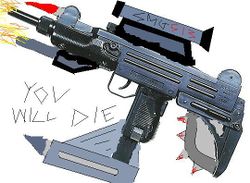 The Ultraness SMG 513 (U-SMG-513) is a totally awesome sub-machine gun developed by the SWBTYAWCW, the Super Way Better Than You Army With Cool Weapons. It is probably the most powerful weapon that you will ever see in your whole entire life time (probably). So start staring at it if you weren't already. It is equipped with ROBO-GEEK Zhorophenon super lasers, a Dewalt chainsaw blade, an ultra sharp diamond bayonet, a C.I.A. classified state-of-the-art rocket launcher, a Kit-Kat chocolate dispencer, a toxic gas spraying nozzle, a suicide bombing bomb compartment, and finally the bullet shooting part itself. Do you think its awesome? Yes, I do. No, I don't you moron!

The SWBTYAWCW was founded at the beginning of the universe when a caveman that scientists have named Bob started attaching a dinosaur egg to some poo and a stick to create an awesome weapon that could explode a person's head with its awesome power. It is so awesome that I couldn't even find a picture of it. The SWBTYAWCW has stopped many catastrophic events from taking place, such as not letting Tweety Bird take over the universe, and taking beef from Muslims, so that they would not use it to destroy the universe.

What Would Happen If You were to Get Shot[edit] 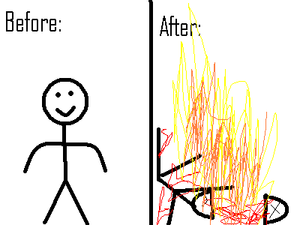 This thing can beat up any body, believe me.

You would die, painfully and slowly, burning up on the ground, heavily chainsawed, with burnt Kit-Kat all over you and holes in your body.