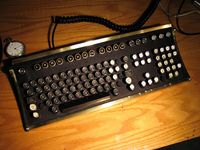 Banhammers are traditionally controlled by a steam-powered keyboard. Users in Iowa may choose to "drop it like it's hot".

A banhammer is a mechanism the elves grant Invigilators in order to smite miscreants.

Although most only use this tool for good, Andy Schlafly and his cronies use it to silence the opposition in a truly Communist manner. Even Jimbo is known for abusing the banhammer.

The banhammer originated in MMI when Larry Sanger felt it necessary to censor the heathen bologna site Wikipedia that has more articles on Pokemon than History.