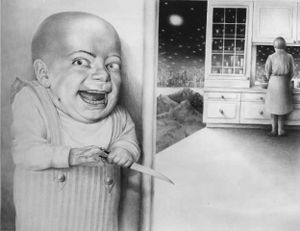 In Puerto Rico, they do things differently.

Mum is in the kitchen, as usual, putting some sort of din-din together. She seems oblivious to the starry, starry night all around her. The knee-hills are abating, slowly, but with intent. The thing-baby clasps the Stabby-thingy! His withered thing-hand bothers the handle lovingly, also with intent.

Suddenly, the starry, starry night does not change.

Water begins to boil after 4 and a half minutes...

FIN The Hispanic male sat across from the district attorney, smirking, thinking of his double-Jason. "Double-Jason means you can't try a man again for killing his wife twice," said the mustachioed and vaguely capable of further Gaelic hirsuteness Hispanic man. The poor man couldn't even afford a real ax. There would be no band.