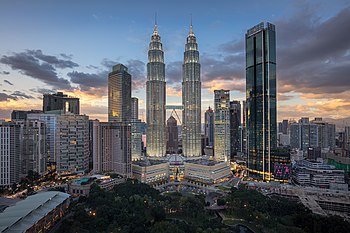 So long story short, Malaysia is a Kingdom founded by India and China and it's rich today, probably because of Naan and Dog Curry Exports with extra dog meat of course!

Malaysia is a country. That's (almost) it.

It's got almost 30 000 000 people (wow that is a lot) and basically serves to annoy those crazy people just south of them in what's known as Singapore.

He's a madman, but not mad enough for ?pedia

The history of Malaysia is shrouded in mystery, which is why some historians call it the mystery of Malaysia. Well its believed to start from a group of sultans (not sultanas, I know it sounds really similar but not exactly the same), who decided suddenly to undertake super powers (not superpowers, I ::INTERNAL ERROR - REDUNDANCY::) as a king. Well they kept arguing but for some reason, there's still a king. Of course the position's only ceremonial, but to have a king in this day and age would be an amazing achievement.

So there was this one king or something from India or something whose name slips my mind... let's just call him Esh because that's his name. So Esh admits that in India, life isn't very good: the government keeps coming and going and few people even care as to his affairs, despite being a king. So he leaves on the next ferry and gets stranded in Burma where he tries to set up a colony. But Burma, one has to note, was obviously doomed to failure because after all, Esh couldn't speak the language, didn't bother learning, and the natives were violent and threatened to put him under house arrest. So then he tried Thailand. Thailand was boring and because few people even bothered with them, not anyone, and everyone was just lying on the beach in Phuket or Koh Samui.

He tried Cambodia, but the natives had religious beliefs which Esh considered blasphemous. He tried Laos, but it was landlocked and hard to get too. He tried Vietnam, but was allergic to rice paper. Soon he sailed down through the sea and came across a wonderful land - MALAYSIA! AT LAST! SOMEWHERE TO SETTLE! The natives - there weren't any natives when he docked at Port Klang, they were all in the mountains, and he would be OK here. Soon he was followed by boatloads of 352 women, 1440 cows, 705 sheep and 921 pigs to begin settling this country.

Then the Portuguese suddenly came, Esh said 'I have a bad feeling about this' and then popped his clogs. So the Portuguese took over all those defenseless women (not sexist, it was true back in those days), and founded New Lisbon, then the Dutch came, and forced everyone to speak Dutch, then the English came and turned it into part of their empire.

So soon thousands of men marched down from India and China, and the Malays who had been hiding in the mountains for so long, attacked the British. So soon there were three races: The Malays, who were assumed to be cheating thanks to their war tactics, they massacred the British; also the Chinese, who were the majority by this time, but hated by everyone else because they took over all the business; and the Indians who cooked for the rest (because roti is always good).

Soon there were illicit relations between Malays and Chinese which formed the Peranakan (even today Chinese insist that it means 'idiot' in Malay) race. They were unwelcome in the new colony, so fled to Singapore (where their artwork can be found gracing the hallways of Changi Terminal 3).

In the meantime the British were turning this into just a hotter version of the UK, with cricket, parks, tea and other genuinely-British things. So the British were kicked out, Malaysia declares independence and that ends it OK?

Culture is a big issue in modern Malaysia, to the point that, whereby people have not even got proper food in Africa, Malaysians eat more food than any other country. Because teh tarik[1] is the best, isn't it?

They could use the '1Malaysia' ad campaign for anything. They could call rubbish bins 'Waste Disposal 1Malaysia' and the unwashed masses people would flock to it.

As for religion, this is a big issue too, Indian, Chinese, Malay people pray to Islam, Hinduism, Buddhism, the Flying Spaghetti Monster.

Blogs like this one oh and also this one aim to expose the highly corrupt practices of the Malaysian government by posting images that have to do with nothing else meaningful, eh?

Malaysia just hangs out for no purpose off the Eurasian mainland. Singapore is lucky it's not being knocked about. But it is, in order of law, and F&N is half-price across the border. So is fuel, but nobody - honestly - cares!