I think this says "Qatar" in Arabic. It could say "Moth balls."

“If this ain't a cookie-Qatar country, I don't know what is!”

Qatar is a Middle-Eastern country best known for, I don't know, being confused with the United Arab Emirates. Contrary to popular belief, the name is pronounced "Cutter" and not "Ka-tar," otherwise, I would have opened this article with an obscure joke referencing Radiohead's 1993 single Anyone Can Play Guitar. Nevertheless, you're stuck with Bad joke guy. 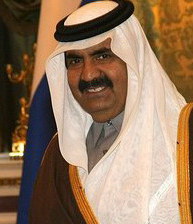 Qatar was formed in-- let's just get to the controversy part.

Through completely fair and non-complicit means, Qatar won the bid to host the 2022 World Cup. By that, of course, I mean that they paid a lot of money to officials. Like any rational country, they made this bid being fully prepared to host one of the world's biggest and most expensive events. Once again, by that, I mean that they literally had none of the infrastructure or resources in place to do such a thing. Logically, they decided to virtually enslave some Nepalese people to build stadiums. Because slavery is the new cool in Qatar!

Note: these are alternative facts.