“Naxx is for losers. REAL men do ICC!”

“Get off the freaking computer and change your clothes! They don't fit anymore!” 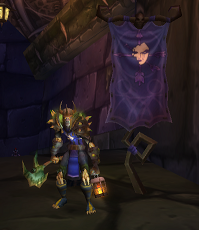 Well there is one benefit. You do get to look like a frikken sick zombie

World of Warcraft is a video game where you get to play as a character of ten different races and many different classes and do quests, raids, and even player vs. player combat WASTE YOUR LIFE FOR ONLY 15 FREAKING DOLLARS A MONTH!

In this game, you get to play as ten different races. Let me break them down individually.

There are ten classes in the game.

There are a lot of major cities in the game.

It's like $50 for the regular game, it's $35 each for both the expansions and guess what? It's $15 dollars more every MONTH. Though many of you may scream, "Screw this! I'm playing Guild Wars!", don't freak out. World of Warcraft is a ever-changing game that will give you your money's worth. Haha. I can't say that with a straight face. Seriously, Blizzard is making you waste your money.

Effect on Your Life[edit]

World of Warcraft will ruin your life. The following things you will lose if you play WoW.

Dealing with a World of Warcraft Addiction[edit]

If you are suffering from a World of Warcraft addiction call the following number:

“It helped me! maybe you can be saved too! Or maybe I was just lucky. Or maybe I never stopped playing and still do in my sleep.”