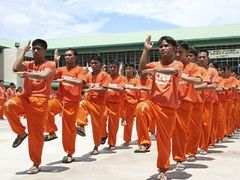 Don't go to the precinct or you could end up like these poor unfortunates.

“I was gonna bomb that boat but it was already precinct”

~ Book of jokes for five year olds on precincts

A precinct is a place where people with no home go to get treated like the dirt under your fingernails[1] in the hope they will one day be released so they can commit another crime to return once again.

“It's really good at the precinct. You get XBOXes and Playstations and Nintendowiiphones McSegas and awesome things like that.”

The precinct comes highly recommended by such public figures as Chris Brown, Stephen Fry and many other ne'erdowells somehow scraping a living off the back of their 'long stretches'[2]. For this reason, precincts have become more popular than leisure centres[3] and there are currently no free places at any precinct anywhere in the Western World. Governments are currently in talks to ship criminals over the age of 60 to Kerguelen as we speak, so you'd better keep an eye on Grandad.

In some parts of the United Kingdom, local councils have been known to construct hypermarkets and shopping arcades on the site of a precincts. Inmates are forced to stand for hours while their wife/other half tries on every single item of clothing within a one mile radius. If that weren't bad enough, the bread and water is twice as expensive as Tesco and there are no parking facilities for heavily armed limousines[4].

Shopping precincts are, however, excellent places for massive games of British Bulldog.