“So I was walking down some alley on the way home after purchasing a paper, in which the horoscope foretold my explosive death, when some fat guy whale fell on me, then proceeded to eat my wallet as well as some of my tastier limbs”

~ A fat guy's chain of thought after the above quote 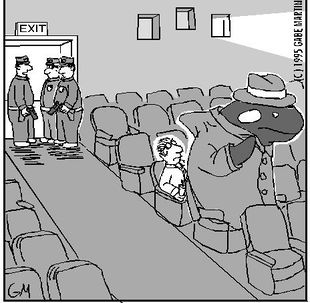 The hilarious misadventures of our feline friends[edit]

The Killer Whales, especially Rap Master Snorky, grew bored one day trying to eat the gawping, lightly-seasoned audience that was inconveniently behind seven layers of idiot-proof glass during their shows and decided instead to buy fur coats. En route to the local fur-coat dealer they were besieged by a small bespectacled guy with a questionnaire - unfortunately his sparse nerdy flesh gave them a bad case of indigestion and they woke up in a hospital. Filled with hunger compassion for the perfectly healthy people that had forcefully stolen the other patients (now dead) beds, the Killers decided they had to eat mercifully euthanize the suffering people.

Slightly unbalanced by the high lead content of their victims the whales settled down onto the ward's computers to engage in an after-dinner internet game of chance. Unfortunately they clumsily clicked on the wrong link on the page which took them to an IQ test. After retaking it several times, reading several hours worth of Wikipedia articles and wearing previously unseen reading glasses the Whales aced the test and even found time to make an eloquent yet witty remark about it's ease and implying their knowledgitude! 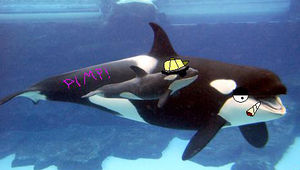 With their now extensive knowledge in pretty much everything the Killaz cruised back to sea world in the pimp mobile (a pink golf cadd) accompanied by two fine dolphins wearing skimpy bikinis. They stealthily sneaked back to their unguarded pool, to find the guard assigned to them shooting a long-since dead hobo. The gun-toting Guard was still under the assumption that the now considerably soggy, hilarious decoy cardboard cut-out Killer Whales were the real sea Gangsters and not just a £5 cop-out from B&Q.

Still hungry even then, the whales craftily kept fast-forwarding the hour hand on their watch until God got so irritated that he moved time along in their favour - it had spontaneously reached time for the Two O clock show despite it being 12:31PM December 1969 a few seconds previously!

The killing and consumption of a paying audience[edit]

The vastly witty and intelligent Whales easily broke through the idiot-proof glass and managed to eat a record number of audience members, including the janitor's mop and bucket (the janitor remains at large.) After writing an extra chapter of the Qu'ran and explaining how they had been lying about needing water to survive for decades in order to effortlessly obtain the easy life, they decided to help the government in it's aim to stabilize the world's growing population. They set to work almost immediately, gnawing the postman's leg off.

Downfall and rise to pornstardom[edit]

Always one for a distraction, the whales were easily sidetracked from their mission upon the discovery of the PS3. Filling their time with awesome fearitude surrounding the latest 1337 release: GTA4. However things didn't quite work out as planned; when Lance came back from the dead to betray them one final time they lost it. Everything changed...

Their quest to complete the game proving fruitless, the whales sunk into depression. After a whole lot o' beer, they dizzily twirled into the world of high stakes poker.

Several gored pedestrians later they got bored and linked up with their former flat mate Super Bull so they could fulfil their lifelong dream of crapping on random peopl- arrGGH!!1! Ahhhh Great!! Now there's whale crap everywhere and hoof marks all over my best shirt dammit!!! Yeah, you run back to your fat whale of a wife you Seaworld rejects!! Oh sh*t they're coming back.

The author appears to have made a quick exit via window and it looks like he's been hit by a passing lorry. Ah, look he's sleeping... in two pieces conjoined by a pool of red liquid and a snazzy tire track. Anyway, it looks like he left his wallet here was keeping my wallet safe for me next to what appears to be a large of dollop of crap on the keyboard." *takes in a good whiff* "Smells like whale crap.