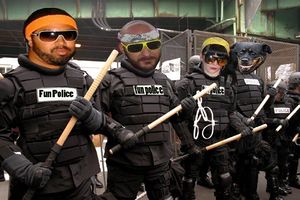 The Fun Police are an authoritarian law enforcement organization dedicated to preventing people everywhere from having fun. They were created by the Parligressional Congrement's "Act to Prohibit Fun, Merryment, Enjoyment and Frivolity in the Interests of Order, Commerce, Peace and Stagnation" .

Their motto is, "We ARE the Fun Police. We are not amused."

The Fun Police are granted special immunity to do one (and only one!) fun act: they get to make siren noises and wave their arms around when they don't have actual police cars with sirens due to budget cuts. 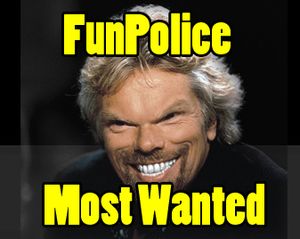 Richard Branston is the arch nemesis of the Fun Police. Their frequent battles often leave entire cites in ruin. Consequentially, their battles often create fun for people who enjoy watching professional wrestlers and Godzilla movies. Critics of the Fun Police claim the destruction is too "frivolous" and "enjoyable." Richard Branston himself has gone on record to say that he enjoys these battles, saying they give him a "break from the constant lifestyle of swimming in pools of money and having sex with women." The Fun Police have been working diligently to find a less fun way to defeat Branston.

After hearing news of Richard Branston's plans to colonize Mars, the Fun Police released a statement stating that "[Branston] is going too far this time. We will be doing everything in our power to prevent him from colonizing Mars, along with anyone else who might think that it sounds like 'fun'" The Fun Police's main representative, Jim Belushi, went to the capital to request a grant to began constructing the least fun rocket in existence, but was respectfully denied.