From Illogicopedia
Jump to navigation Jump to search
Whoops! Maybe you were looking for Panflautism, or Pantheism (proper)? How about Pantherism, or Panfriedism? Or possibly even Pandaism? 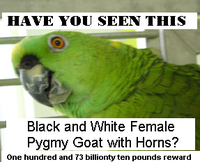 Shoddy workmanship was blamed for this monumental scruw up.

Panflotsam is the belief that god is in all the trash and waste floating on and in the ocean. His hobbies include Scientologist-baiting, getting laid, tanning, every album by Rush, Freudian analysis, sponge-munching, collecting death-jazz concert tickets, rodeo clown, Lawrence Welk and pushy salesmen. Flotsam, a good and just God, has His opposite in Jetsam, a murderous bloodthirsty God, intent on the annihilation of mankind. He drives a Mazda 626, keeps a mailbox in Tripoli and gives blood every two months.

Supported by the warrior caste, this religion is one of three modern remnants of Zoroastrianism, and is mandatory in Reno, Nevada. Bumping up against priests and priestesses is forbidden, unless witnessed by four carpenters who've never tortured a small animal.

For so it is written in the Uhuru Mazda owner's manual, "For such was the shame upon him, that he shat himself, a great and fluidic conflagration, and he hardly noticed. And yea, did he verily smite the And down the path to the sea wenteth he, he of whom his hovercraft throttled endlessly until the horizon met nipples."

Spaghetti pirates are hired to dispense the flotsam (as opposed to the "Manifestation of All that is Holy and Festooned, Flotsam") Since they are of the unclean caste, they are not allowed to actually handle the flotsam without protective gear and Mickey Mouse ears.

Jestam would be an anti thing, but in truth, the analogy does not completely follow, as we say in the energy business.