From Illogicopedia
Jump to navigation Jump to search
Whoops! Maybe you were looking for Panflautism, or Panflotsam? How about Pantherism, or Pantheism (proper)? Or possibly even Pandaism? 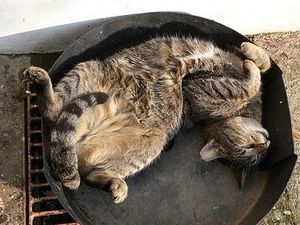 The cat is in a pan, therefore, it must be food.

The delusion that God wants us to eat only fried foods is called Panfriedism. They believe that frying pa ns and woks are gods, and that cooking pots and Pol Pot are goddesses It is a well documented mental illness, frequently found in wikians of all sorts, cave divers and surreal painters of the early 20th century.

In 2009, the Unitarian Church of Chapstick Vulture Panfriedism headquarters and firehouse in Wilmette, Illinois ripped off an idea from Nickelodeon cartoon Invader Zim, that there is a planed called Foodcourtia, and that every so often they have an event called "The Foodening". Official church dicktrine diverges from the cartoon in that they believe the planet is in our solar system, but hidden by magnetic vulture radiation from human perception. The Foodening became a massive effort to sell butt scratchers at Fenway Park in Boston. It was met with strong resistance from OINK, foundation for the eradication of white people's more annoying mannerisms.

I'm scared shitless of them! Jesus, just thinking about them makes my teeth chatter. Frigging eight-legged monstrosities, especially the hairy ones. George Bush (the second, less intelligent by far one) never ate cats, and I can prove it. Any documentation has been shown to have been fabricated by noted fabricator Jimmy "The Fabricator" Fabracatore of Chelsea and parts south. If you ever see that cheese-eating little bastard, you tell him I'm looking for him. Tell him I want my fucking money!

OK, I'll be right up front about this; I just like the word "antler", moreso the plural. I even like the rare ancient plural form, "antli". Remember Bullwinkle? I swear, 30% of what made him funny was the antlers. This goofy bastard with antlers, walking around Frostbite Falls, just generally being an idiot... I modeled my life on this dude.

Oh, I swear! I saw you can get these awesome horns implanted in your forehead! It's the balls! I'm sure I can find somebody who would make me antlers. Ah! That would be so cool!