From Illogicopedia
Jump to navigation Jump to search
Whoops! Maybe you were looking for Pantheism (proper), or Panflotsam? How about Pantherism, or Panfriedism? Or possibly even Pandaism? 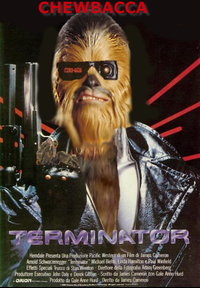 Chewbacca's close ties with Panflautism and Scientology almost got him the part of the Terminator. This is what that would have looked like.

Panflautism is the belief that God is incarnate in flutes. Naturally, this makes flautists closer to God, and according to their beliefs, a superior human being. They eat a lot of ribs and Spanish rice, most often prepared in a traditional Puerto Rican fashion.

Confessing to carrot bondage, in 1653 a Puritan mascot was flogged for inappropriate urination, and cast aside. Appaloosas were always preferred, but, of course, Custer would rather have had a last supper.

The central figure of this faith is Chewbacca, the 3D Glass-wearing Terminator. Were it not for his close ties to Tom Cruise, his treason trial would have certainly doomed him to a furry, furry death. Since the opposite was the case, however, this did not happen.

Atomic Gumshoe Day, the movie Predator and Microsoft BackOffice are excuses to get drunk, smoke dope and do other stuff not normally done in a proper work place. The days are celebrated semi-weekly on a bifocal basis, notwithstanding taxes and erudite seamstresses.

Be sure to buy an untraceable cell phone, and migrate in tens and twenties. Pack plenty of whistles for the journey, and bring your own bilge pump. When the nose starts bleeding, you can use tampons if nothing else is available.