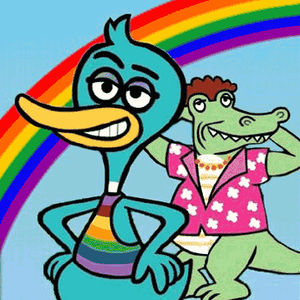 The queer duck in the wild.

The queer duck (Dendrocygna homosexualis) is spotted in the wild in large, flamboyant groupings known as prides, a trait shared with much larger creatures such as lions and other jungle cats. A pride of queer ducks typically contains between one and two hundred same-sex pairs, which can be readily identified by their distinctive waddle and vivid rainbow colours.

The nest of a pair of queer ducks tends to exhibit tasteful interior decoration, as the species is prone to forage far and wide to find antiques and other knick-knacks to enhance its carefully-maintained appearance. The queer duck, nonetheless, will spend much time away from the nest at events ranging from art gallery openings to public demonstrations.

Queer ducks vary from monogamous to promiscuous in their mating habits. While one pride of queer ducks may migrate to the beaches and the lakefront to engage in cottaging, others flock in pairs to Gander, Newfoundland as part of a pattern established because they can get married there.

Between queer ducks, the sexual union itself is consummated in a bizarre position known as a cloacal kiss, punctuated only by a distinctive cry which sounds to be somewhere between quack and cock, cock, cock...

The feeding habits of the queer duck are based on those of the swallow, a small bird which it seeks to emulate. When two queer ducks meet, one will ask "do you swallow?" while the other responds by licking its beak and winking knowingly.

As a larger bird, however, the queer duck feeds voraciously and is only satisfied when its tender underbelly is completely filled with seed.

It appears unlikely that any offspring result from these unions, although queer duck populations in major centres nonetheless only continue to grow. Perhaps the increase in the number of queer ducks is due to their relative success in the various professions, where they are known mostly for their quack opinions and the enormous bills they present to the client.