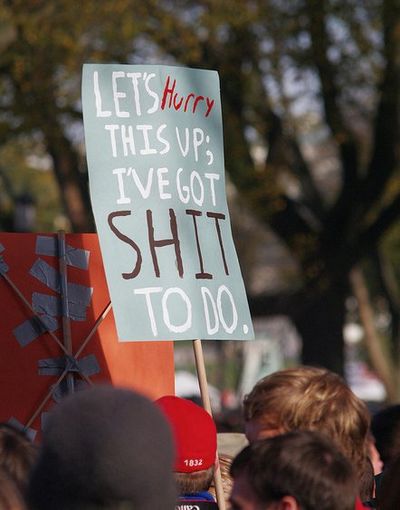 So, Hindleyak had no printer on 21:01, 5 Octodest 2009 (UTC), and was understandably concerned about being naked. I suggested he print a .PDF file and clothe himself virtually. Still no word as to whether he took my suggestion.

He was... still naked. As such, he felt free to wave his private parts at your auntie. I know, I know... stolen wholesale from Monty Python's Flying Circus. I had the record when I was a kid, listened to it... a lot. Stranded on an island, options were limited.

So, Hindleyak... the porridge stayed toasty and herpetic in the insulated grand thermos container. At the time, he was a budding psychopath. Had he been a girl, that sentence could have been a double entendre. Things, however, were as they werre, and the occasional misspelling stays for posteriorarity. That's the butt. Raster canasta was popular then too. There was also that smell...

Later that day, the dogs had to be walked, rage to be abated. He had to form a plan, and quickly. Leafing through Venn diagrams, he came upon an ontology of buzzards and their relationship to God by way of recycling. Always use the green bin for the recycling. Never the red. That one's for trash only. And save the mercury for the fish. Fishes? Irritating it is, two options for plural there is.

Not that that fool Yoda had anything to do with it. It was just an exercise in quasi-spontaneous writing with ghosts controlling the fingers. That plumber dude with the ghost show ought to do an episode on automatic typing. Or would it be automatic word processing? And from there, why not automatic coding?

They could call in voodoo priests, or some other animist believer of authority to contain and use the ghosts for their own purposes. The programmers and analysts would know no different. As far as they were concerned, they were writing the code themselves. In actuality, they were possessed by spirits with questionable morals and goals.