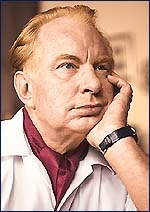 ~ L. Ron Hubbard on all his years wasted to playing Pac-Man.

L. Ron Hubbard is the father of modern Scientology.

LouLou Ron Hubbard was born on a tugboat in the town of Planetopia, Nevada. His mother, Esmeralda Dentingbox-Hubbard, worked at a local gravy factory. His father, Xander Locklee Hubbard, danced naked in the park for pocket change.

While he was out one evening sniffing corncobs on his granddaddy’s farm he was abducted by space aliens. While in their spaceship he was schooled on all the sundry secrets of the universe. When the aliens finally grew bored of his odd habit of eating pork chops out of his sister’s high heel shoes, they threw him overboard and went back home to bend all of their paperclips into stethoscopes. 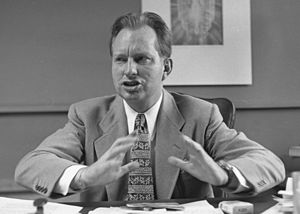 "And when the waitress brought the cheeseburger out, it was this big! And I ate the whole thing like a big boy."

Using the intergalactic knowledge he obtained via his social relations with his alien abductors Hubbard managed to write the book that would later be recognized as the handbook for Scientology: Little Bobby's Drunk Again.

L. Ron Hubbard opened a cupboard. A board full of cups. Cups full of boards, in the process of boarding the cupboard and posting on your message board, staging a coup full of fish and sandals.

Hubbard died after overdosing on bananas but through the wonderfully powerful magic of Scientology he was able to live on as a half-burnt piece of toast in the kitchen of some saintly mother and her pet goat. It was obviously not the most ideal way to exist, but Hubbard did not have much of a choice since Christians and Jews are the only ones allowed to come back to life as bipedal homo sapiens.

Using all of the knowledge he gained from his forced interaction with intergalactic aliens Hubbard was able to bless this poor ignorant world with the greatest religion in the history of believing in stuff: Scientology.

Scientology is a truly wonderful religion full of magical wardrobes and brave little toasters and DeLoreans that are able to transport you back in time (but only in gaps of 30 years and only if you are able to reach maximum velocity before the lightning strikes the clock tower) and other various sundry items of propane and propane accessories. 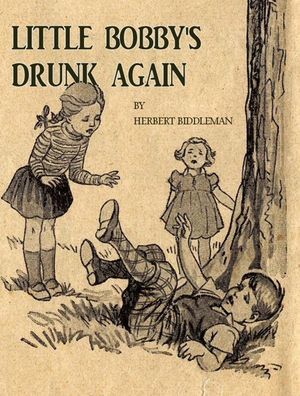 This is really what space monsters actually believe.

While writing under the name Herbert Biddleman, Hubbard was able to pen what would become the manifesto of Scientology: Little Bobby’s Drunk Again.

The novel tells the story of Bobby Gulpingwhiskey who lives in the town of Dump Water, Florida. When life and school and the Vietnam War become too much for little Bobby to cope with, he turns to drinking the stuff under the sink for solace. He quickly becomes an alcoholic, resorting to pulling out all his hair and ripping off all his skin in a failed attempt to regain his humanity.

Bobby eventually meets his death from alcohol poisoning in an opium den and has to spend eternity licking whipped cream off the hairy back on a myopic potato peeler.

Commonly Scientologists wear tin foil hats at home and have to self flagellate daily. They must confess sins weekly at their gatherings. If a person has no sin to confess they haven’t thought hard enough and are shunned for the following week. Scientologists use magic spells to wash their clothes Butt plugs are provided for the higher level Scientologists for secret rituals.