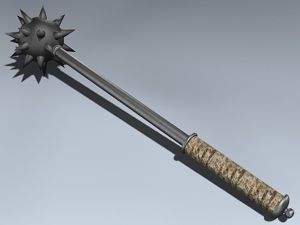 The national symbol of Macedonia.

Macedonia is a European country dedicated solely to the mace, the medieval weapon. Mind you, this country came to be long after the mace went out of use, but its rulers called the weapon "so fuckin' cool" that they needed to dedicate their country to it.

The people of Macedonia are ambivalent to the dedication of their nation to a weapon based on coolness, as they are much more preoccupied with dealing with their cows, sheep, and other animals that they take care of. They also wear wooden shoes.

There aren't actually any maces present in Macedonia, except for the National Mace in the capitol building in the capital of Javelin, which, you guessed right, is also named after a medieval weapon on the basis of its coolness. This mace is kept in a glass display cube for residents to look at and admire their tired eyes and to daydream about hitting you in the head. No one does, however, because it's not a notable mace, and mace enthusiasts can go to virtually any other European country to see better maces of stainless steel made by the Cheap Mace Joke Company.

The founders of Macedonia are unknown, but its likely that they were just a bunch of teenagers or man-children with very little idea of how to create or run a country. It's really a disaster of mace-ful proportions.

Macedonia is also known for Alexander the Great. Contrary to the popular belief, Alexander "The Great" Skopjefyromovski was not Greek and was indeed a Slavic Macedonian, who was also fluent in Albanian so he could talk to the people of his country.