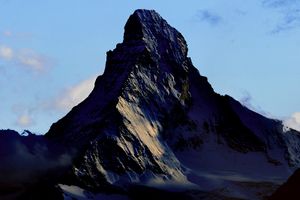 Some geologists think The Black Mountain is made entirely of coal. Others think that's impossible due to the limited slumping angle of coal, and it must actually be made entirely of pure evil.

Montenegro is a nation of happy men that declared their independence in 2006. They are mostly pirates, Recent Changes checkers, and Cheap suit makers. Nah really. Everybody there also has the same last name: "Crnagora!" (which of course means Montenegro, which itself means Black Mountain).

"Montenegro" is also the name of a major motion picture released some time in the last century. It's very French, and everybody in it eventually dies of ennui. It's all angsty and existentially, so if you're an American you probably won't understand it, even if it has subtitles. You might still enjoy the soundtrack, though, which was kind of good. You might also like the bit with the pruning shears and the customs agent. (Actually the customs agent doesn't die of ennui, so I guess that only affected the main characters.)

The film also hasn't got any explosions, which is a major black mark against it. But it was still better than "My Dinner with Andre", where nobody in the movie died of anything but it was rather common for half the audience members to die of ennui during the film.