This isn't actually the coat of arms of Finland - in reality there's a lion on it - but no doubt this is some sort of hilarious Scandinavian visual pun.

Finland rules at Eurovision and beating the crap out of biscuits. It's also the country where that gothic band with the guy with the feathers in his hair came from, who seem to have disappeared since 2004.

finland is just a fairytail story

Finland was founded by really ugly fish who where tired of the best undersea jobs going to the prettier fish. As founder Mcfishogoth said "It's like you have to win a undersea beauty pageant just two get a job or a wife". The country expanded when more discriminated fish, including pacifist sharks, arrived looking for a safer and more tolerant place to live. 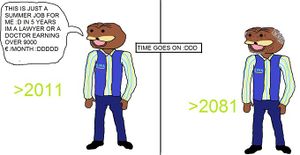 Spurdo Spärde, a poorly-drawn bear that appears to be the lovechild of internet meme figures 'pedobear' and 'sadfrog', is probably Finland's finest export. He can be applied in any situation and attracts adoration and disgust in equal measure whenever used.

“What the fug :DDDDD I havings quote in illogigopedia :DDDDDDDDD”

Eurovision, known as Täääööäyä Kaaraakaa in Finnish, has submitted its will to Finland. Since 1956, the beginning of Eurovision, Finland have won almost every contest, coming second only once to a Belgian singing panini.

Finland is not as good at basketball as Estonia or Canada. Those are two of the counties I live in. Norway is better then Estonia, but not as good as Finland. This is because of aliens which are from mars are trying to conquer Latvia, a country that has a landscape entirely made of old pesto.

I hate Finland for this reason. You shouldn't though, because you are a polar bear and at leas the country lowers taxes on white fur. Racists.

Finnish (or Suomi, which makes the language sound like an alternative version of Sumo wrestling) is actually just a strange mix of Estonian, Turkish, Klingon and Russian, making it near impossible to read, let alone speak. Most citizens give up trying to learn it by the age of four.