The Master of Disguise 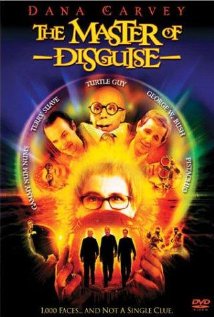 The poster to the filmmaking classic.

The 2002 film The Master of Disguise featured legendary actor Dana Carvey in the most riveting role of his career. The film is often considered an achievement in modern cinema, and is listed in many such lists as AFI's Top 100 Movies of All Time.

The film features Carvey playing Pistachio Disguisey, an Italian-American who lives with his parents who run an Italian restaurant. One night, his mother and father are kidnapped, leaving poor Pistachio all alone to find them. However, he isn't alone, as his Papi shows up to help him. What he tells Pistachio changes his life forever.

He reveals to his grandson that like his father, his father's father, and all Disguiseys, Pistachio has the potential to be a Master of Disguise. What is a Master of Disguise? A Master of Disguise is a person who can take the appearance and identity of someone else, real or fictional, to incredibly convincing effect. As Pistachio trains, he learns that an evil billionaire kidnapped his father, Fabbrizio, to aid him in stealing some of the world's most valuable artifacts for sale on the Black Market.

Pistachio trains and trains with his Papi's assistance, slowly but surely getting better at disguising. Carvey's ability to seamlessly go from silly hijinks to wacky shenanigans has been praised by critics for decades. In one scene, Pistachio has his suit blown up with helium to make him appear fatter, but wouldn't you know it? He blows up too much and floats up to the ceiling. Inventive comedic moments like this are what truly set The Master of Disguise apart from films like it.

Once Pistachio's training is done, he needs to find an assistant, and after a long interview process, Pistachio and Papi select the perfect candidate: a single mother named Jennifer. With Jennifer's help and his remarkable disguises, Pistachio learns more and more information about the evil billionaire and plans to stop him. Just when things seem to be going well, Jennifer is taken as well, and forced to auction off the items on the Black Market.

As Pistachio confronts the evil billionaire, he learns of his nefarious plan. He wants to fake his own death by having Fabbrizio disguise as him and die. It's too perfect of a plan to fail, except for the power of love which causes Fabbrizio to wipe away the disguise and help Pistachio. In the end, Jennifer and Pistachio fall in love, and everyone lives happily ever after.

Dana Carvey was cast in the role of Pistachio Disguisey primarily due to his sheer acting abilities in drama. Producers were unsure if he could do comedy, and were completely amazed by the wide range of impressions he could pull off, given that no tape of Carvey doing any impression at all ever existed. Ironically, though he was a dramatic actor in a comic film, his comedic moments are the ones that resonated with most critics, and inspired many comic actors to get into the craft in the first place.

James Brolin was cast as Fabbrizio Disguisey because it seemed completely original. The idea of James Brolin playing anyone's father was unheard of in Hollywood.

Jessica Simpson's performance as Jessica Simpson was considered an odd choice by studio executives, but given how much she fit the role that was given to her, their criticisms have since been detracted. Crew members were noted to be stunned by how she turned a few simple words on a page into true art in her short time on screen.

Kenan Thompson played a bidder on the Black Market because he needed work.

In the film, Pistachio Disguisey disguises himself as some of the most entertaining and groundbreaking characters.

Books and books have been written on the Kubrick-ian set that was dead-set on churning out a masterpiece. Actors and crew worked long hours into the night hoping for the absolute perfect take. The scene where Disguisey wears his underwear on his head took a full three weeks to film. Brolin threatened to quit the production until he saw a glimpse of the edits and realized the classic he was working on.

Dana Carvey was known to stay in character for days on end on the set. Since he was disguised as so many different people, the crew couldn't count on who he would be on a given day. His impressions were so good, when he was set to play George W. Bush, he fell victim to an assassination attempt by a Communist terror cell. Deep into character, Carvey would not break, and insisted he be taken in the motorcade straight to the White House. Instead, the crew put him in a Cadillac Escalade and drove him to the set of The West Wing.

When shooting wrapped in mid-2001, editing crews knew they had their hands full. Due to licensing issues, editors had to work around the clock to replace every piece of fruit in the background of scenes with vegetables. A strike broke out in March 2002 when editing unions disagreed about what to do with the tomatoes in a bowl 12:48 into the film. Eventually, Carvey himself had to mediate the disagreement, and the tomatoes were merely blurred out. For this effort, he was nominated for a Nobel Peace Prize.

The Master of Disguise was universally loved. It was the first movie ever to achieve a 101% from Rottentomatoes.com, and is number one on IMDb's Top 100 Films as rated by users. A blood feud between Dana Carvey and the Academy of Motion Picture Arts and Sciences prevented the film from being nominated for any Oscars, but it swept the People's Choice Awards--even the music categories. Carvey instantly became a worldwide sensation, being tapped for endorsements, appearances, and lead roles.

The film is often cited as the reason why everyone born after 1990 got into filmmaking. All but three Academy Award Winners for Best Picture since 2003 have thanked the existence of the film as inspiration. Even the gritty period piece 12 Years a Slave gave a special thank-you to The Master of Disguise in its credits. So much of what makes up modern cinema today would not exist if not for this film.