Astronomy Wars: The Umpire Strikes Out 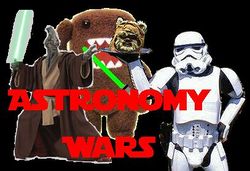 The movie poster. It looks eerily similar to something...

What do you think I am? Some sort of brick? Oh, hello there! Didn't see you. Anyway, back to the show.

Two men walk up to each other. Something hits the ground.

Puke: No! Not princess Laidup! Anything but that! Pleeeaaassseee Ham Salad!

Ham Salad: OK, you go check out that thing that hit the ground. I'm going back to Hollow Base.

Yeti thing: Dearest me... would you like some tea? How about I have you for dinner?

Yeti makes tea. Rips off pukes arm and eats it for dinner. Sticks a rubber one on. Attaches him to roof

Puke: Use the Horse!

Gets thing. Turns it on BLUE LIGHT! Kills yeti and passes out in snow. Glowing old man appears

Puke: Ugh. I think I'm going to pass out.

Glowing old man: Well damn. Er, maybe it's on that bubbly place with that green guy. Would you mind checking there?

Flying thing crashes. Dak is dead, Puke jumps out and makes a rainbow. Metal thing a-splodes. Dog and Man 1 and gold robot and trash can robot and laidup are running

Ham Salad: Uh-oh spaghettios! This way is blocked. We have to go through the Nuteral zone!

Laidup: Ham, your a hunky playboy. Let's have sex.

Dog: Ok, Ham Salad. Wait, I don't speak English! What I meant to say is Roar!

The peeps fly away. Puke is in swamp with trash can.'

Yogurt: Found me you have. Yogurt my name is.

Puke: Are you thick and creamy? My insides feel as though they are going to burst...

Yogurt: Follow me, you shall. To my mud hut we go. Party time it is!

Yogurt: Fun we will have... Ah, screw this talking backwards crap! LET"S GET DRUNK!

Puke: Ok! Ugh, my head hurts! Looks like Ham is getting killed, well, fuck him! Get me the powder!

Booger: Puke, don't leave! We were about to make love

Puke: I know, I don't want to, but I kinda have to follow the script.

Yogurt: Darn, I thought I would finally lose my viginity after 900 years! Sad I am!

Puke: U1! Shut up! Im trying to listen to the radio!

Ham Salad and Dog And Laidup are in clouds. Black guy greats them. HaM gets turned into rock.

They turn on light things

Dart Wader: I am your father.

Hand Gets chopped off. Puke falls down pipe, gets saved by laidup and black guy. The End'