"Come with me if you want to live".

The Terminator was an insanely unpopular b-movie, criticized by critics for its factual content and lack of imagination. It remains the most accurate glimpse of the future to date, and people the world over live their lives in fear as a result. It has been made into a TV series, sequel movie and theme park ride.

Things we learn from The Terminator[edit] 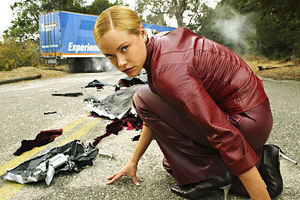 Live with me if you want to come.

"I need your clothes, your boots, your motorcycle and your love. Come with me if you want to live..." Ahh, if only the writers had been a little more forward thinking; I'd loved to have seen that movie! I wonder if during sex a Terminator would make the USB ping sound "down there"....