For those who can't handle the real truth, the spinners of fake truth at Wikipedia have a thoroughly boring article on Ferris Bueller.

"'He is one of most evilest bastards to ever, I must kill him FOR SCIENCE" 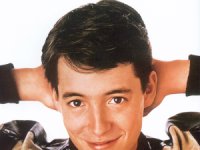 Look at that smarmy little smile...He thinks that he can get away with cutting?

Ferris Bueller's Day Off is the story of how Ash Ketchum lived before he became a condiment, which then resulted in him becoming a Pokémon trainer.

The first scene finds Ferris, a clarinet master who never even had one lesson, lying in an antiseptic hospital room that he has decorated with assorted posters of famed clarinet prodigies. Ferris’ doctor and caretaker, Ed Rooney, informs Ferris that he will soon die of cancer and, alas, there is nothing more to be done. Ferris is heartbroken and calls in his mother and father to deliver his last goodbyes. After a touching exchange, Ferris realizes that spending your last day on Earth in a hospital bed is a crappy way to spend your last day on Earth. He decides to call up his best friend Cameron and girlfriend Sloane for an exciting and memorable day of teen hijinks, breakdancing, exploding cars, and hot babes.

The terminally ill Ferris jacks a float in the Chicago Day parade and enraptures the people of Chicago with his brilliant clarinet renditions of The Beatles’ “Twist and Shout” as well as The Bloodhound Gang's “The Bad Touch,” accompanied by some groovy pop-lock-and-droppin’ from Sloane. Upon the end of the parade, he and Sloane are signed by infamous hip-hop producer Oscar Wilde to record an album with Jay-Z and Snoop Doggy Dog. Ferris tells Wilde that, as he is terminally ill, all recording and video production will have to take place that day. Ever the resourceful one Wilde films a groundbreaking hip-hop video with Sloane dancing on the hood of Cameron’s father’s Ferrari and Ferris, Jay-Z, Snoop Doggy Dog, and Stephen Colbert rapping “Twist and Shout” over a hip-hop-happenin’ clarinet beat. The video becomes a hit and ascends to the top of the charts in less than three seconds, breaking world records worldwide in world record time.

Sadly, Cameron’s dad catches the video and is upset that his car has been involved. The cruel man that he is, he beats Cameron up using only his bare hands and Ferris’ clarinet. Cameron retaliates by driving the Ferrari off the edge of the world while Sloane and Ferris watch, stupefied. Ferris is heartbroken at the loss of his best friend's soul, but Sloane engages him in a passionate make-out session and all is forgotten.

At this point in the film, Ferris remembers that he is terminally ill with cancer. He dies. The American Film Institute ranked this 35 minute scene as #24 on their “100 Years…100 Deaths” list.

Sloane, upset that she may have triggered his death with the aforementioned make-out session, bungee-jumps off the edge of the world as she believes life is not worth living without her snookums-bookums Ferris-poo. Realizing that three kids have just died and he is probably going to be held responsible, Cameron’s dad pole vaults off the edge of the world with Ferris’ now-bloodied clarinet.

Several news crews gather at the edge of the world, seeking an interview with Ferris, but arrive to find him dead. Some hippies at the scene engage in a "Save Ferris" mission, but fail miserably when they realize that Ferris is already dead. This depresses the crews, as well as everyone watching the news, and all the citizens of the world jump off the edge of the world in memory of Ferris Bueller, the late clarinet prodigy.

In conclusion, everybody dies. (But not everyone lives.)

He's the most popular kid in school, and he's a menace to society. He's also a huge motherfucker and will is eviller than the Joker, Green Goblin, Team Rocket, Iron Man, and your mom combined, but especially your mom. Everyone who is smart hates Ferris Bueller including Jesus. Even Jack Thompson and Dr. Insano thinks he's the most horrible kid in the world and hate his guts. Godzilla swam all the way from Japan to New York to fight him. His cancer is all because God willed it and boy does that asshat deserve it. He's a one of those kids who make the rest of the kids go wild. He's a bad influence on my school and the young academics within it. I'm going to crush that little shit if its the last thing I do--you know, give him a little hint of what the real world will be like without his parents to shelter him.

Oh, that kid's parents! He's got them wrapped around his little finger! When I told them that he had missed school 9 times this semester, they were in total shock--typical. I bet that little snot wears the pants in the Bueller family...

There he is! I knew I saw him on Broadway!

I've been following him, all the way to New York. Right now, he's pretending to be a Broadway producer and even swindling little old ladies out of their hard earned Social Security money! This is why that kid needs to be stopped; he's going to destroy our society.

I've got the address to his apartment, and now that I've got a partner, we can take him down. This kid has gone far enough! I hear he's even tricked some woman into marrying him! We can take her back to our headquarters, tell her our plan, and then she'll almost have to help us! Once she's on our side, we'll be unstoppable!

A Note From Ed Rooney[edit]

Save Ferris? Who believes this crock?

Yeah, I know you've heard that name before. Save Ferris, right? He's that kid who's "dying" and has half the town rallying around him. Well, pardon my French, but who believes this bull? I mean, a water tower? Didn't anyone even check up on that kid to make sure he's sick? Or are well all just listening to our sister's best friend's boyfriend's sister? It makes me sick.

The thing about it is, he's just laughing at us all! He's probably out in there in Chicago, having the time of his life. Well, just because it's a beautiful day doesn't mean that you can just...play hooky! We have rules for a reason, and that reason is so society doesn't fall apart. Rules are meant to be followed, Mr. Bueller!

So what? So what? Don't you think that he should be stopped and brought to justice?

Well, who has he hurt?[edit]

Who has he hurt? He's cheating the educational system! He's taking advantage of everyone in town! He's getting to go out when no one else can! Most of all, he's cheating himself! He needs to be educated.

There he is! I swear that him! I've got that little shit now!

Oh, you think I can't get him, do you? Well, don't you worry, I'll get him sooner or later. I've been staking outside his house and my secretary has been calling but no one has picked up...which proves that no one is there. So, I've been expanding my search out to the city. I think I saw him at the baseball game...and then at the parade. I've even gotten a picture of him there! Oh, I'll get him! I'll get him eventually!

Hey, where are you going...? Oh well I'll get him... even if I have to appear in another fucking movie!