“Well, there's gold, and then there are pants.”

A tragic birth and a whole new lots of things[edit]

Anne wanted to be a raven. However, she was born a hooman, with crayon tails. Her hair wasnt purple. Nor was it yellow. Poor was it blue. Whore was it green. Sore was it purple. Shore was it red. Core was it nipple. She had red hair. And then one day she was sitting and then she was like "OHMY my foster parent, poo paw. He dead!" So then she was back going to the place where orphans go. Known as the orphanage.

So an old wooman decided that she and her brudder needed to have a boy to help them in their workings. But that didnt happen! It was Anne who helped. That was the place known as Green Gibbles.

Anne was having a nice time on Edward Prinks Island. She got her friend drunk and stuff, but that is when i stopped watching the movie, so i made up the rest. 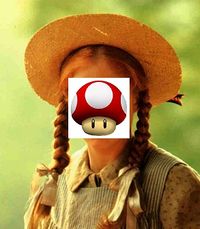 Anne knew that she couldnt live with the old lady anymore because she was not a man. And she wasnt a man either. But that guy named like Matthew was a man. Later on Anne went on a big trip to the moon. You see, she grew jetpacks off her toes. Now toes would be a painful location for jet pack because it wouldnt have enough toes to make a footpack.

Oh look the movies back on.[edit]

Anne decided not to take a trip to the moon, but she can later on. Anne had a teacher but he left. Then she got a new one. Okay im done paying attention again. SO! Anne found it most suitable to go to the moon. On her trip to the moon her hair was singed by the SPPEEED!!!!! and it was green after that. So upon landing on the moon, Anne met the Ozwaldo Expedition. This is a group of Dwarves that are on their way to uncovering their past! Anne was not a dwarf. However, she was not a toad either. So the dwarves took her to their big ole underground place. The walls were coated with orange peels, and the dwarves had big beards. And bears. Except for that one dwarf, named Stacey, or like Dopey or sumthin. Dopey Wanted to save Anne, because the other dwarves were trying to-

I just spaced out and looked up. It turns out that Anne wasnt on the moon, but she found a dead rat.

But now that I am not looking again, shes back on the moon. The Ozwaldo Expedition was back on the move! then Anne and Dopey got away. The jungles of the moon were deep enough for Dopey and Plum Pudding Ms. Stacey Anne of green gibbles to hide in.

Anne and Dopey were hiding under the brush, as the footsteps of the Dwarves were drawing closer. Terrible suspenseful music began to play, you know, that synthesizer crap that you hear in movies like... for instance Day of The Dead. If that is the one where they are underground hiding from zombies. I cant remember. Anyways, Anne and Dopey were hiding beneath the pitch of a trail. Kinda like Frodo, and the other hobbits do when they are being pursued by the Nazgul in the first movie. The Dwarves continued down the path in the rainforest on the moon, but they never noticed Anne and her friend. Just then!!!!!!!!!!!!!!! Anne and Dopey leaped from their safety and were revealed to the enemies. I guess the plan was to ambush, but they were both instantly stabbed by some dwarves. I dont even remember what beef they had with the dwarves anyhow.

Anne was dead. But she was resurrected by some Lich and she had to serve the SCOURGE!! But then a sexy also dead elf woman decided to make her a good dead person. Dopey wasnt cool enough, and I mean... how many undead dwarves without beards do you see these days? Then Anne realized that this wasnt her life, and it was a video game! And that is when i looked up to watch more of the movie.

Oh look the credits are rolling.