Whoops! You may have been looking for Le PussyVator, Early Morning Television or perhaps Media.

“When they ban you from the news agents, when you're stuck in really tight jeans you can't fit your hands down, and even when you're wondering about the mechanics of cat sex: Das PussyVator, To the rescue!!” 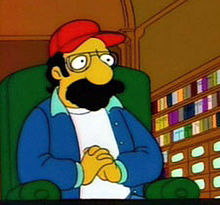 Spielbergo as seen in the special DVD-only director's commentary.

Das Pussyvator is an 18-R rated direct-to-video release that occasionally gets shown on the Big Boy's Channel. However, you can also view it on YouTube thanks to their recent allowance of explicit material. Yeah! It's rumoured by diehard fans that a hidden link on the Wikipedia page for "cats" leads to a director's cut of the movie. The leaking of these secrets is thought to behind the mysterious disappearance of the lead actor's genitals.

Directed by Senor Spielbergo, most of the film was shot in Mexico though external shots were filmed on location in Sam Allardyce's back yard, Bolton. Allardyce himself makes an appearance as a footstool, whilst his dog plays a dog peeing on a footstool.

At the end of the film, one or more people are blown up by a passing caravan bomb which ran loose from the Top Gear car park; one or more people may have survived. The doomed survivors whittled down the few hours 'til their deaths by violently defecating on and then consuming their deceased fellow cast.