When Hell Freezes Over... 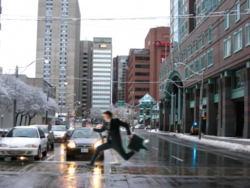 Probably a scene from the film.

When Hell Freezes Over... is a 2002 feature-length film directed by Fozzie Bear, featuring some of the cast of The Happy Tree Friends. The movie is notable for consisting of determinable plot whatsoever.

In late 1999, Fozzie Bear was dealing with a crippling addiction to mayonaise and crack cocaine. In order to get himself "straight" again, referring to both his usage of drugs and sexuality, he decided to work on his next movie project. He started writing a script for "Spiderman meets the A-Team", until being notified he would be breaching approximately 8,950 copyrights. Fozzie then delved with alcoholism for a period of around three weeks, before buying a new typewriter and setting down to writing When Hell Freezes Over.

The closest thing the film came to a 'plot' was one of the minor character's intentions to but a vacuum cleaner, although a conclusion to this is not shown at any point.

When Hell Freezes Over... even lacks an actual ending, finishing abruptly in the middle of Mr Blobby's cameo appearance. This was apparently the result of the production company completely forgetting about the whole project towards the end, after being given a box-set of mid-nineties cartoon The Critic.

Reaction to the film was widely that of anger, disgust and despair. Many screenings in Romania broke into riots after cinemas in the country enforced a "No-exits" rule. There was a single positive review from Blind People Weekly, probably a result of them not being able to see what was going on.