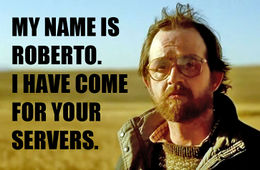 One of the most famous parts of the film. He has come for your servers.

The Roberto Code is the name of an epic film produced by the same bloke who does the Portuguese language version of Uncyclopedia. It has achieved a Gold-star status on IMDB and is considered a cult classic by some. It was also the first, and quite possibly the last time Lyrithya was allowed anywhere near a camera.

It is a production based around a very simple plot, covering such controversial topics as the emancipation of small beetles.

A man who, not content with buying all of Portugal's cable TV networks, decides to royally cheese off the Portuguese Uncyclopedia. The Illogicopedians are unaware of this devilish plot as they are too busy fussing over pickles at the supermarket. Once Roberto arrives in the middle of the land of Illogi (A.K.A. the areas of Canada no-one wants), he attempts to steal a six-pack of pure tar from the fridge before being block'd. He later decides that he can't get enough female attention and furthermore believes those bastards at Illogicopedia have none neither, so creates a number of sockpuppets such as Uncyclopedian_6666 (not being intelligent enough to know the supposed devil's number is actually 666), Spídér's Wéb: Á Píg's Tálé, and Fatman3342.

He later decides to release seven sockpuppets upon an unsuspecting Illogicopedian public. None of them are caught until someone finds out the message written in Roberto's huge collection of sticky tape, which reads: "I HAve a HuGE BanaNA and 7 Sockpuppets". Roberto then sends off the socks to irritate several various Illogicopedia users, who then discover the code by accident whilst attempting to organise a pickle party with tea and biscuits. The code was forwarded to the National Wiki Service, who confirmed it to be Alay for "HAHAHAHA I HAXxed yuor severs". It was then discovered that Roberto bribed Barack Obama to do all his sockpuppeteering and tennis.