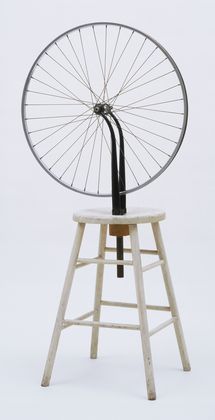 Why did we ever give this guy a raise?

Dadaism (also called Dada or Janitaurus) is an avant-garde art movement which arose during the era of Modernism, when people stopped bothering to draw nude models as they were and instead opted to draw terrifying stop-motion animations of them falling down stairs. It is commonly associated with 'anti-art' notions which question the bourgeois nature of high art and of silky blue extendable Medusa-like hair which can be controlled at will. These ideas became more radical and progressive as time went on.

Initially, many impressionistic works were conceived as Dada, before the anomaly of 'found art' pioneered by Marcel Duchamp took place. Within this framework urinals, bicycle parts and half of Cher's gardening utensils were signed and displayed in art galleries. As performance art became a more prominent medium, neo-Dadaism incorporated aspects of these works. Many performers were sixteen-year-old casual waiters at the gallery cafés, and one worker in particular mastered his presentation of looking terrified in front of his audience, wetting himself, and signing next to point on the floor at which he had urinated. As most Dada works tend to, this caused significant controversy and caused him to be fired from the establishment upon their discovery of the practice (despite the fact that they were constantly questioning whether to fire him for the few weeks beforehand).

Prominent media personality, Noyvis Dundee, momentarily became an art critic for the weekend because his directors told him to. He claimed the work resonated with him on a personal level, remarking "if I had've been allowed to do that on television, I would have acted much the same". He was then asked to review Picasso's Guernica, and upon viewing it had promptly fainted.

The proprietor of Dada, similarly, had been a young man working as a handmaid for a prominent artist in Imperial Franceistan. During the year of 1916, he found a box stowed away amongst the herbs and spices, and unbeknownst to him it contained several dangerous termites. These arose and ate all the furniture and wooden cooking utensils in the kitchen, leaving piles of dust in their wake. When the owner of the household opened the kitchen door to find these piles, the handmaid simply remarked "All I did was open the box". As a wooden sculpture which was to be submitted to the local gallery had also been devoured, he was forced to re-arrange its remnants into a depiction of the divine Master Soo before hitting it several times in frustration with his metal pans, which had survived.

Following this incident, the handmaid realised that wrecking things and displaying them in galleries would have been his destiny, if it weren't for the fact that he had already planned on making a pilgrimage to the nearby desert which happened to contain an arena, where he would compete in the annual robot battling championships with a bucket on his head, impeccably disguised as a robot. If it hadn't been for his acquaintances arriving to bring him back he would have used the several hundred thousands of dollars to buy a house in the Bahamas and hire his previous masters to do his work for him.

However, his homecoming incited a revelation: to create Dada you must find your miyagi. Use the miyagi. Miyagi the miyagi. Knock something over. You are now ready.