~ Francis E. Dec on Chrysippus and his feloniously gangsterized donkey 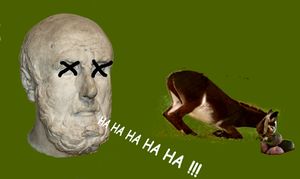 It is a philosophy of calm, rational self-control, as illustrated by Stoic philosopher Chrysippus, who got his donkey drunk and died laughing as it attempted to feed on figs. Thus proving that he himself could not control himself thus making him a hypocrite and the donkey said a super secret whisper to him when he was lying dying.