Still a great game, GT2 may not have looked much different from the original Gran Turismo, but it certainly was much bigger. With over 1000 cars to choose from and brand new tracks, as well as loads more races and new rally competitions, Gran Turismo 2 was awesome, and although graphics weren't much improved, fans absolutely lapped it up.

During any race on Special Stage route 9, as you are passing through the first tunnel, brake hard and pull over to the left of the track. When you come to a stop, hold L1 and press up. The driver should get out of the car and walk over to one of the emergency telephones and pick it up. You should then hear a short interlude of ‘Money Money Money’ by Abba, before a congratulations message appears saying go to the West City. Do so, and a new manufacturer named ‘Volvo’ should have appeared! There are seven new models to choose from, and all cost less than 35,000 credits. 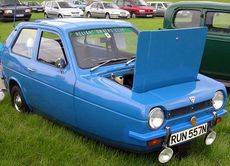 Stick a pony in me pocket...

Oh you are a plonker Rodney! To get three types of Robin Reliant, buy all the cars in the TVR section and tune them all up to the max, including weight displacement and turbos. Once you’ve done this, the new manufacturer ‘Reliant’ will appear in West City where you can buy traditional Reliant Robins, but also Robin Vans, like the Trotters’ off Only Fools And Horses!

Be warned! Do not turn too sharply, or THESE CARS WILL ROLL due to them only having three wheels, and thus largely unsuitable for travelling at speeds in excess of 53 mph!

First, you have to purchase the Honda Civic VTi ‘93 from the Honda 2nd hand garage. Next, soup it up as much as possible. Don’t get the racing colours yet, but go on the High Speed Ring in the Clubman Cup. Get up to the fastest speed the car will go, then press all the L and R buttons together. You’ll get a message saying “Phwoooarr!” and once you finish the race, the car WILL NOW BE 1002HP!!! Be careful with it, though. It can be extremely hard to race on some tracks, especially Motor Sports Land…

I have found the best cheat for gran tourismo 2. this cheat lets you unlock the seceret drag event.

For winning you will recieve a 3000hp hks supra Limited edition which can reach 327 mph on the test track. all you have to do is follow these simple steps:

Use the HKS Drag 180sx to race in the laguna seca indurance ( 90 laps ) make sure you win the race , then get in your new car that you have won race it in the turbo tuned car cup.

Win the test track race if you recive a drag (if you dont keep winning that race)go to the main gt league and instead of that being there it will say drag event complete this race and get your new HKS Supra LM 3000hp enjoy!!!!!!