NASCAR is a sport where 40 drivers compete in a grueling contest of speed and strength. It was formed by Grues in the year Vin Diesel blowed up Pluto. NASCAR stands for No Afterlifes Soon Comrade After Rolling. Or N00bs Are Sucky Car And Racers. Anything is correct as long as the numbers are correct. 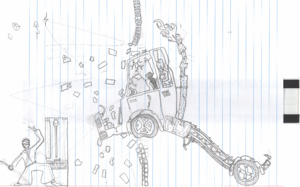 Action at a typical NACSAR race

Headlice Motorsports very well could be the most suck-sessful race team in NASCAR history. Their cars are numbers 5, 24, 25, and 48. They won more races than ANYBODY but whenever one of their cars win, either the race is fixed or they cheated.

Gordon Jefferson, driver of the Rainbow Warriors Chevrolet, is the main reason Headlice Motor"sports" is the big team everybody wants to join. He won more races than anybody else currently driving, but nobody likes him and him and his crew chief Steve Retard cheated every time. Him and his boyfriend Jimmieeee "GayJ" Johnson, have single-handedly taken the competitiveness out of teh sport.

Kyle W. Bush, driver of the 5 car, who will drive the 18 car next year, is the son of legendary Indy 5000 winner George W. Bush and the brother of Kurt W. Bush. He is possibly the fastest kid out there, he is just too n00bish to be as good as his old teammates, Gordon Jefferson and Jiimmmiiiieeeee Joohhhnnnnsssssoooooonnnnnnn.

Quite possibly the most uninteresting driver behind Matt Kenseth, he is primarily known for his dry accent and CHEATING. His chew cheif, Cheater Mouse art thou most experienced and despised cheaters in the garage. He is hated almost as much as his teammate Gordon Jefferson because of their Car of Tomorrow dominance and boring life where he plays War of Worldcraft in his mom's basement when he isn't racing.

Chase is a sad, depressed boy who is WAY too hard on himself and has never won a race before. A long time ago, a witch prophesied to Chase's not-so-awesome dad Bill that history would repeat itself. In exchange for Bill selling his soul to the devil, the witch promised that Bill and Chase would get the same number of wins. Chase needs one more runner-up finish before he is supposed to win. Chase's most overused quote is "I'm so sorry, I hate it for my guys." 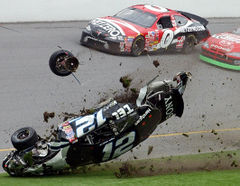 A driver crashes after forgetting you aren't supposed to eat the KFC until after the race.

KFC Meats is the forgotten extra driver every great team is burdened with. He never won a championship, never made the Chase to the Cup, or did anything his teammates did. That is partially because his sponsor obligations force him to eat fried chickens all race long and concentrate more on the food and less on the track.

After Michael Waltrip sold his race team to another famous Michael, and the team now fails to qualify more than before.

Mikey has always been the kind of guy you just want to punch in the face if you hear him talk about NAPA Auto Parts, Burger King, Toyota, UPS, or any other major corporation you could think of for one more minute. After winning the Daytona 500 TWICE, he still wasn't happy about his race finishes so he bought Toyota, made Bruce Lee his crew chief, and immediately failed to qualify for 11 races. That, and he was caught cheating by putting rocket fuel in his car. Needless to say, he sucks at everything except talking.

David is the ultimate n00b at Runescape. He hasn't done much in his career yet since he is just a lvl 6 n00blet who goes to Lumbridge to beg for free stuff except that Michael Waltrip brainwashed David into a big-mouthed sponsor addict like himself. Despite the fact he is 39th in points, that is Mikey's fault, not his. If he was with any other team, he would be a superstar already. He is currently the best driver with the team, beating out Mikey and Old Rusty Gun Dale Jarrett. His car is #00, which is perfect for him because the letter "00" is in the words R00nscape and n00b.

Dale Parrot (Jarrett) is an old, washed up mailman who literally races a big brown truck on the track. He used to win all of the time, but he is getting old now. He is thinking about retiring and going back to the Postal Service where he started his career. He was reported to have Chuck Norris-like abilities back in his day, but they were taken back by Chuck Norris after Norris sonic-punched him in the face. He is a 3 time Daytona 500 winner getting outran by newblets too.

Pencil racing is called Pencil Racing because their cars numbers (2 and 12) have the #2 in them, like a #2 pencil. Both of their cars are blue because "blue" is a euphemism for "sad", and both of the team's drivers are emo.

Son of George W. Bush and brother of Kyle W. Bush ((see above)), he is always drunk and is never ever good at racing. He also tried to kill Tony Stewart with the lawnmower under his car but Tony was too fat to fit under the lawnmower.

Despite 6 years of experience in NASCAR Mextel Cup, he is still a n00b. This is due mostly in part by his weird name, which contains numbers. And he is That Guy's teammate. El no habla ingles but he does win last year....wait...no, it was 2003...wait it was 1337 BC...Well, he did win a race sometime a long time ago.

Team Purple Dinosaur was started when Barney ran out of kids to eat and got bored so he made a new NASCAR Toyota race team. Just like all new teams, they suck, mainly because the cars are Toyotas and team is owned by a big, purple, gay dinosaur.

Michael Vick's younger brother who kills (and eats) more dogs in one week than ol' Mike will in his life, is a ricer punk who decorates his Toyota Camry, built in Tokyo, with stickers advertising Red Bull and a giant spoiler (even though everyone has one with the COT, his is a few feet bigger). He is also the only driver who has 14 inch plastic Wal Mart spinners and green neon lights on his racecar/ricercar.

Who is AJ Allwayssucks? Nobody knows for sure, because he hardly never ever ever even qualifies for the races. When he does, he always blows his engine or causes a 44 car pileup (Remember there are only 43 cars in a race) and always ends up anywhere between 35th and 43rd. That is why nobody knows what AJ stands for. Some conspiracy theorists believe AJ actually stands for "Always Jackson (the Michael variety)" because both of them are pitiful loosers.

Carl Bigheadwards, is not a power-hungry control freak like his name implies. He just couldn't fit into his helmet. C@r1 b!6h3@dw@rd5 can't fit in his hat because he is so f***in smart, he speaks 133t in his interviews. I mean he is the super awesomest great mega-awesome driver ever to drive the super-awesome sport that is NASCAR. He also can fly. Carl has had plastic surgery to give him so many muscles. He is even more buff than a gorilla on steroids. Carl used to be an olympic gymnast, but switched over to racing so he could do triple backflips off his car.

What? You mean the robot? I don't even think he blinks. Well he is like Uncle Pete next to Jimmie Johnson's Dramatica. Much more fun. Conspiracy theorists will argue that he is simply the result of a failed science experiment in which the objective was to fuse together the DNA of Bobby Labonte and that of a Midwestern target employee by the name of Matt Kenseth. He began racing superlatemodelmidgetfullsize30000hpsportscar in the superlatemodelmidgetfullsize30000hpsportscar k&n west east north south series and won around 90,000,000 races in the 58 bc season. He won championships in both 2000, 2003 and 2094. He has a wife and 61 sons.

Grg Biiffle is sponsored by Wii. That's riight. Whenever he wiins, he gets a Wii. Lucky for hiim. He has 46 wiins among the 3 seriies. 12 iin Cup, 18 iin Busch, and 16 iin CTS. That means he has 46 Wiis. All of them were free. He wiinned the Truck champiionshiip and Busch champiionshiip. Every time he does that, he gets 10 bonus Wiis and a WiiStation360. He has 66 Wiis and 2 WiiStatiion 360s. And he's not selliing any of them. I bet wii all wiish wii were hiim riight now.

Mayhem Diburrito's real name is too long and confusing to pronounce, so we all call him 'DiBurrito'. DiBurrito loves burritos, and eats so many of them that he gets really obese. He is also sponsored by Burger King, and receives free burgers all the time. Diburrito has never won a race, and never will.

Kyle Larson does 1000 dirt races a year. He likes dirt racing so much that he is addicted to it. At first, when Kyle started racing, he came last every time. Then, he got good. He began winning adult races in full-size sprint cars at the age of 8. Kyle won so many races that he got a ride in NASCAR. At first, he sucked at NASCAR. Everyone thought he was a nobody. But one season, after a very long time, Kyle suddenly won 2 million races. Kyle Larson has a special hot air balloon attached to his sprint car, and travels the country in search of more dirt races to do. Kyle's nickname is 'Yung Money'.

McMore of a McMagician, McMagic McShowed how to use a McPayPhone to get McStuff to Kasey Kahne, and Kahne showed McMagic a real McMagic trick, but then disproves of it using a McPayPhone again.

This is a fatass team where drivers sit in chairs and race them.

Martin is the winningest driver alive in the modern day of this going-in-circles sport. Martin looks tipsy, as if he has drank 26 beers at once. He has always sucked terribly at racing and had a crap life. One day in the year 2035 AD, he woke up from meditation and learned how to drive. He won 2000 races that season and won too many stages to count. Martin was crowned the championship winner for the next millennium.