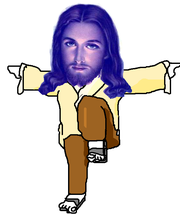 Jesus about to unleash his singature move, 'the Hummingbird.'

The Christian Wrestling Foundation, founded by Jesus, is an organisation that strives to incorporate wrestling into the worship habits of as many believers as it can. Starting out in AD32 as a humble pie eating contest Jesus held with his disciples, it quickly evolved into combat when the 12 grew tired of Jesuses cheating and tried to cut off his magic pie-eating eyebrow. Several hours, and a stream of projectile leper-healings later everyone calmed down, and after deciding to leave the episode out of the Bible to protect their sponsors, the CWF was born.

The current day CWF is very different from the one in New Testament times. For one thing the use of giant killer robot Tyrannasauroses is now banned. Instead of the lava-filled arenas the early believers enjoyed, 21st century Christians are mostly forced to make do with tussles over the baptismal pool. The only danger from losing coming from the pool's sharp corners or a stinging eyeful of holy water. Of course this is not unilateral, and many still opt for a pit of boiling jelly taken from the eyes of heathens. Many high ranking Catholics reject the traditional format all together and fight it out in chasmous arenas made out of boymeat.

The fights typically last 20 - 30 minutes, and many churches incorporate them as integral parts of their services. Some even go in so far as to include them in Sunday school. When a match is scheduled the partaker is free to wrestle who or whatever they like. Mostly this includes hobos picked up near the church and relatives of Richard Dawkins, but increasingly believers are choosing to take arm and wrestle against the niggling feeling that the non-believers may have a point. Should the Christian win they are awarded a kiss from the Minister's daughter and a 20% off coupon for eternal life at God co. Unless they're Catholic.