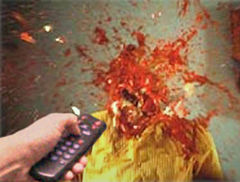 One wrong move and you've had it.

Tiddlywinks is the standard issue duelling game used to settle debates in the armed forces and television industry. Losing a game results in a harmless, yet highly irritating and debilitating, explosion emanating from the head of the loser. For this reason, tiddlywinks has been banned from the sport of limb throwing because it can provide an unfair disadvantage: have you ever seen a headless man win a game of limb throwing?

To play tiddlywinks one must skilfully flick custard chips into a cauldron simmering with essence of wang. The player who is the most popular wins because, because schoolyard rules apply, OK?

Remind everyone how interesting the Ubersnail is away from the game of play and subtly suggest they should turn their attention away from the game whilst you cheat by putting your custard chips in the cauldron and calling in friends to make you the most popular competitor. After about three months the people will tire from watching the Ubersnail and ask you if its ok to turn back around. Say no.