“does it look dirty or do you want to touch it? or both?” 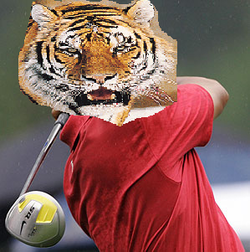 Tiger Woods on the golf course.

Tiger Woods (pictured right) is a well known animal who's owner actually trained him to play golf. When Tiger was a little baby his owner trained him in the art of golf. He even stands upright! He has never once tried to kill anyone while on the golf course except that time where he ate his caddy but let's be honest, the guy was asking for it. His owner was commented on saying, "Tiger? Tiger? I fuckin' lost $200,000 when I bet on him to win the Masters last year and he fuckin' choked." Then we realized that actually wasn't his owner but we were interviewing the most dangerous mobster in the world. Half of our camera crew is being served at an Italian restaurant as meatballs at the moment. When we finally did get a hold of Tiger's owner he didn't have much of a comment. He only said, "He makes me money but he's a pussy [cat]. Why did you but 'cat' in brackets? That's not what I meant. I meant he's a pussy [cat]. Ughh... He's a schmuck [cat]. That doesn't even make sense!" What is the secret to this fiery felines success ESPN's senior golf analyst Andy North made a shrugging motion when he was asked and Stuart Scott said something about his playing being quote, "ridoncufied", or some other attempt to actually sound black along the lines of that. We tried to interview Tiger but he just made a glorified meowing sound. It was like, "Myeeeeeooooowwwwwwwye!" or something like that. We saw how his clubs are specially made so that he can grip them easily. When we asked golfer Phil Mickelson about him he said, "Tiger? He'll eat me if I finish first in the rankings. Hence the 2006 U.S. Open choke." No matter what his secret; Tiger Woods is a force to be reckoned with.