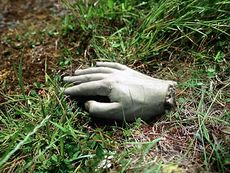 Limb throwing is the ancient Scottish sport where gingervitus suffering people spin round in a parallelogram until their limbs throw off into the surrounding crowd. The winner is the competitor who kills the most spectators with their airborne severed limbs, but points are awarded for knocking down birds, breaking car windows, and hitting one of the Prime Minister's men.

The sport was eventually banned when one of the limbs landed on a spectator, groping the poor fellow.