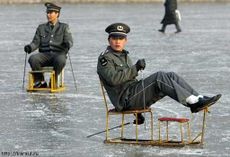 The Winter Olympics are a series of 'sports' that only Eskimos, Canadians and Scottish people know about. On the face of it, they exist solely to boost the morale of countries where it's so cold they can't feel their feet: hence the luge. God knows they need all the help they can get, after all, some of their local public houses and bars have been buried in snowdrifts for decades. Who knows who, or even what, resides in those buildings nowadays...

To make up for the inability to sunbathe, the world's coldest countries came together to form their own, special Olympic Games: the Winter Olympics. Now, every four years, people in Finland have something other than naked snowballing to watch on television.

Incidentally, naked snowballing is a primarily male sport in which the participants are required to own a copy The Sound of Music on DVD, more than two pink shirts and a coffee percolator. Additionally, contrary to the popular ruleset, use of yellow snowballs is freely permitted.

“What, it never mentioned any of this in the brochure!”

Those looking to take part need not worry, for there are no "fruity exploits" at the Winter Olympics (though many speculate that if there were, the events would be seven times as popular). Current viewership for the Games stands at one seventy-eighth of Scandinavia, Canada's Prince Edward Island, three penguins and a polar bear. Actually, there could be more than one polar bear, but TV execs haven't been brave enough to double check up close - it's thought numerous polar bears cover their noses, rendering them virtually invisible to all but themselves whilst watching the Winter Olympics. Apparently, even animals are embarrassed to admit they like the downhill skiing. 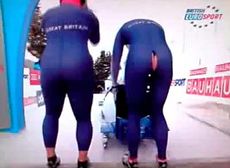 "Does this outfit make my bum look big?"
"No, just gigantic."

In the continued pursuit of viewers in the temperate world, organisers have attempted to 'sex up' their broadcasts with increasingly silly and sometimes appendage-threatening events at each new Winter Olympic Games. The most recent addition to the roster of games is 'skate around in a circle and push people to the floor', a development of games played by violent eight-year-olds at unregulated, unstewarded ice rinks when their parents aren't looking.

In addition to the traditional sliding down a hill on a tea tray, an event also pioneered by mentally unstable Scottish schoolchildren on an extended playtime, there's competitive falling through thin ice and, in recent times, hitting people over the head with a large slab of frozen snow.

Overall aims of the Winter Olympics[edit]

"So you're saying it's all a Russian conspiracy?" "Ohhhh yessss."

Aside from providing people in cold countries with something to fill their largely sparse television schedules, the main reason the Winter Olympics exist is to provide an excuse for numerous absolutely terrible, nay horrible, video games based on the events. You may think these soulless cash-ins are produced solely for the money - not so. In actual fact, they are there to piss everyone off to the extent they feel the need to rant on internet forums, video sharing websites and small-time wikis to create further hype for the Games, fashioning a never-ending circle of anger which grows and grows until people actually bother to watch the Nordic combined.

In short, it's just an excuse for those living nearer the poles to get their own back on temperate regions.

“Meh, let them have their fun. We'll take our chances with skin cancer, thank you. Pttttthhh!”