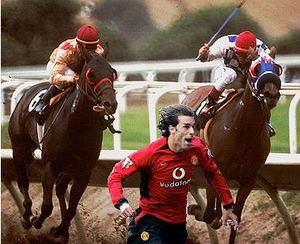 The Netherlands' Ruud van Nistelrooy winning the Grand National in 2001. After the race, he was never seen or heard from again.

The Grand National is a yearly event in which small people ride horses (and, on occasion, porcupines - see pain) to inevitable and gruesome injury. Since the Victorian ages, people have flocked from miles around to Liverpool to see forty horses squeeze onto a course built only for five dogs and a ferret, a yearly tradition upheld to this day, despite the best efforts of animal rights activists.

The most prolific of all Grand National competitors, Red Rum, survived the most stagings of the event from 1954 to 1956. That's right, he raced in three Grand Nationals, which is an absolute miracle by modern standards: most horses fall at the Fence Of Death (Fence #1) whilst the rest are usually finished off by the Shallow Pool of Doom.

By the time the (extremely lucky) living competitors reach the finishing post, some three hours later, there is sometimes a winner. If so, they must be buried at the finishing post and each of the remaining competitors fed oats laced with arsenic. Red Rum successfully avoided this fate for two years as he pretended to be dead when in fact he just had a mild urinal infection (got from sitting on a dodgy couch - at least that's what the mare said).