Pea Stuntin' is a new phad sweeping the nation of Norwich which involves performing tricks with peas. It particularly interests the homeless who use it as a cheap method to busk. It is a freestyle practice, people and monkeys of all ages can enjoy this pointless thing I dreamt about during a lucid dream fantastic pass time. Performers can also use additional tools, such as knives and forks. 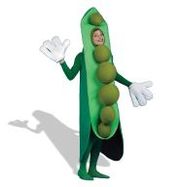 Pea Stuntin' was invented by Shaun Ploddington Vassell, a tramp from Seattle who fell through a time warp and emerged in front of a potato stall. He walked into the local Home Bargains and stepped on a reduced price tin of peas, causing him to trip and fall to the ground and bursting the tin open. Shaun embarrassed with this event pretended that he meant to do it, so grabbed the peas that were airborne and spun one on each finger. Upon this mighty effort, all the peas simultaneously flew into his mouth. Onlookers gawped at the superb pea skill. A shelf stacker walked over to help him up, only to exclaim "You gonna pay for those?". A jealous tramp looked on afterwards and said "The best part was when he fell over. He's got talent in opening tins with his heel, I mean what the hell was all that fancy pap?"

Shaun was busking with his newly acquired pea skills and earning literally pennies. While performing at his favoured spot, the lamppost near KFC, talent scout Bob Morris Jr. walked into the red circle which Shaun was performing in, enraging Shaun and resulting in Bob receiving a bloody nose. A brief discussion about misunderstandings and half a can of peas consumed, Bob and Shaun came to agreement that they would team together to create a video capturing Shaun's talent. This was to be the birth of Pea Stuntin' as it is today.

Shaun is credited for inventing all of the current existing tricks. The most impressive is the Anthem Pea Roll, which involves the performer running really fast towards a line of several peas separated a metre apart. The performer then does a continuous forward roll while playing the German national anthem on the harmonica through their nose and eating the peas off the ground on each complete circle. This trick requires precision, full concentration and at least ten metres ground clearance and must not be attempted near brick walls or wandering children.

As a result of complaints from unsatisfied consumers of peas, Pea Co. farmed a brand new refined pea designed to be more aerodynamic, slick and agile. The pea is said to increase performance by 78%, however consumed increases wind by 124%.