Smash ball is a humble yet extremely dangerous and viciously fatal sport originating in the small australian town of Adelaide. It was founded in 2006 by three men; Randy Mcnuggets, Balsamic Destructorb and some victorian guy. The 'sport' consists of no particularly sensical rules and is basically a game made by three jolly friends looking for an excuse to smash strangers.


Smash ball was created on friday at approximately 11.34 exactly. Its creators Randy, Balsamic and the victorian guy created the sport as a way to release their bottled anger, after encountering legal difficulties releasing their anger by kicking peoples children and dogs. The three creators have been dubbed as the 'queens of smash ball' and it is thought that they are so incredibly talented at the sport that they could defeat an entire team of bears. The creators are also talented tennis champions. All three of these men were once children and none of them have ever been dead.

As previously mentioned, smash ball has no solemn rules and can be played by anyone except old people and young people. To begin a game, five willing players are required (usually moderately strong, crazy men). Then a gauntlet must be established approximately 4 metres long and 2 meters wide. 4 players stand in this gauntlet and are 'guards'. The remaining player must attempt to sprint from one end to the other without being killed. Any physical violence is permitted by both guard and runner. Face and rib shots are permitted. As are elbows to the eyes, kidney jabs, spleen jabs, sucker punches,turkey slaps and biting off skin and acid. 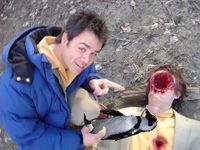 Non fatal injury occurring after a penguin was indeed used as a whip.

There are many misconceptions about smash ball and its rules. Despite common belief smash ball is not an easy way to 'do chicks' and zero percent of the creators condone sexual assault of any kind. Here are some other rules that despite being widely beliwved, are false:

Connections With Other Sports[edit]

Despite being a game reserved for the manliest of men, Smash ball has come under scrutiny on many occasions for its apparent similarities to Gridiron and Rugby. Many Gridiron players have made the funny, yet fatal mistake of believing Smash ball to be an easy sport to play. Some of these people quickly saw the wrongs of their ways and returned to their feminine sport. But still many of these people believed they had the manliness to continue, and were very soon proven wrong by a sever case of death.

As well as its so called ‘connection’ with Gridiron, Smash ball has been criticised for its links to Rugby. When this topic was brought up at an after match press conference, the three founding fathers of Smash ball were quick to reject these claims and were quoted saying “There is no links”.

Smash Ball around the World[edit]

Due to the cheap cost of running such a game, Smash ball has become a popular game around the world. However The game has undertaken some changes due to differences in culture and religion.

An example of Smash ball in France

America: Due to being shitty at sports, players are required by safety guidelines to wear massive amounts of body armour and helmets to protect their fragile bodies. Many players also opt for painting seemingly useless black lines under their eyes. See: Cross dresser
Canada: Similar to Australia except played on ice and everyone apologizes before and after
New Zealand: No changes have yet been implemented in-game. However players are required to wear erotic nurse outfits and pole dance before playing. This ‘war dance’ is apparently supposed to put fear into opposing players. It doesn’t work.
England: Although not a rule, many players choose to drink copious amounts of alcohol and stab opposing players with broken glass bottles. England has the highest fatality rate out of all countries that play Smash ball.
France: No use of the arms or legs to bring down an opponent is allowed in France. All players on the defensive are required to head butt players on the offensive until they die!
Iraq: The game isn’t even played in Iraq, but the rules for it still apply. Kill the infidels!
Scientologistan: Due to their supernatural abilities, the inhabitants of Scientologistan, known as Scientologists, Have many rules which won’t be found any where else. The use of time travel is strictly prohibited unless you do it to save a life. And the use of psychokinesis carries the ultimate punishment of being demoted to Operating Thetan.

The smash ball championship happens twice a week and takes place in someones backyard or an abandoned swimming pool. No umpires are required for this popular event, partly because they are freakin gay and partly because when you have been smashed you will know as you would have heard the bones break or you will be lying in a small pool of your own blood and urine. Teams from all around the globe (except iraq) come together for these championships. It is recommended that your team consist of five players but may have less if your team is mind bogglingly good or more if your team sucks balls for breakfast.

Prizes and What are not Prizes[edit]

Prizes vary greatly and can be anything from a russian bride through to fertility. Fatality is not a prize. Contrary to popular belief, suffering from gonnohrrea is also not a prize and this is something experienced players tend to avoid. Upon victory players celebrate with a cold beer and a take home copy of a Matt Damon clone. Upon retirement Players have been known to leave with a new b-52 aeroplane or a starfish.

Flight helps but is not essential (See French rules image). The ability to run faster or as fast as sound is good. Speed walking Is often practised by competitors before an event. The use of an evil twin can be beneficial. Competitors with really strong necks are usually well chuffed. Proficient sword weilding abilities can cause fatal injuries that can result in death.