Warning! The car crusher is extremely dangerous and can have dire consequences. For this reason, discretion is advised when viewing this article. And God help you if someone performs the move on you.

Car crusher is a 'special' move in the game of rock, paper, scissors (RPS). Most famously, it was used by Ethelbert Q Bashint-Bishop in the 2007 World Championship as he crashed out in round one and a half to newcomer Wallace G. Wallopingcock. Incidentally, his move was beaten by a fnurdle, a much rarer manoeuvre only performable when the player has no thumbs.

Car crusher beats a whole load of things, including, but not limited to; disco dancing aliens; Penguin biscuits; Confused.com; a dude with a baseball bat and anorexia. More often however, it can be seen beating carpets, meat and eggs. Of course, the list is potentially endless as many variations of human hand movements can be beaten using the move.

If used on a human hand the results can be disastrous - the recipient can be left for dead, paralysed or even unable to complete the game. For this reason, only a select few are permitted to perform the move, and must do so with an extreme amount of caution.

On one occasion the car crusher was actually witnessed to beat a five-finger Spledgeulogger, a moment that went down in history as the first time the 'Spledge' was beaten in competitive history. The match, a West Indies regional qualifier, was televised on BBC Choice and watched by a grand total of 300 people, an all-time high for the 5AM 'graveyard' slot and still the record for competitive Rock Paper Scissors matches broadcast in the UK. The crowd, two ants and an independent adjudicator (who in this case was doubling as cameraman), went utterly butterly as Bermuda's Lincoln Convertible crushed Jamaica's Oscar Nomination by 10 points to 3.

Match terminated in Round Seven: Nomination unable to continue due to death 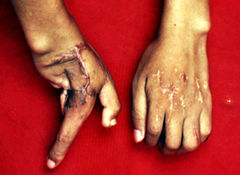 You just got beaten.

Of course, the car crusher is not the best move in a game of RPS. It can be beaten by the following:

Note: this does not include Reliant Robins and Vumblies.

One must remember these are the only moves that can beat the car crusher save barleys, ultra spaceguns and mutant chickens (three moves outlawed in 2003 but still regularly used in club matches).