The Professional Grass Inspecting League of the English Premiership 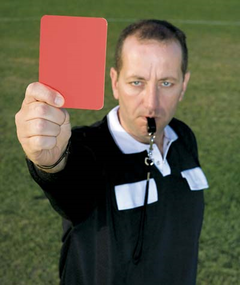 The grass on this pitch is in breach of FA regulation 745 - dealing the referee a hand of red cards to play bridge with. 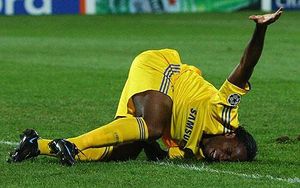 The Professional Grass Inspecting League of the English Premiership is a national organisation. Based in Wigan, its job is to carry out routine checks on the quality of grass on Premier League football pitches, making sure that the grass is using blades and not studs. Studs of grass, apart from not existing, can prove very distracting for any female players on the field, of which there are none.

Entry to the PGILEP is open to any player, but they must first pass an initiation which involves getting an opponent - who has to be completely innocent - sent off. Current members include Cesc 'Fall on the Grass' Fabregas, Didier Drogba and Cristiano 'Efellova' Ronaldo, who is held in particular high regard in the Grass Inspecting League. Though the latter has since moved to mainland Europe, his legacy lives on in Britain thanks to the continued exploits of Kevin Davies and Jordi Gomez

The League was formed by Arsene Wenger, who, despite never actually being able to see anything, was able to notice that Premier League pitches were becoming of such poor quality that his players were not able to play their usual slick passing game. This angered Wenger, who promptly threw a hissy fit at a television interviewer and vowed to get revenge on the evil that is a poorly prepared football pitch.

In response to the formation of the PGILEP, numerous (mostly British) footballers clubbed together to form the Shin-Splitters Association. Its purpose would be to negate the influence of the PGILEP to some extent, but mostly provide business for local hospitals. Naturally, it was immediately lambasted by the Government, who have enough problems maintaining the NHS as it is - Michael Owen's total number of hospital hours alone tally more than the national average for a person over 92. Whereas most footballers have a favourite pair of boots or gloves, Owen has a favourite bed at Manchester General.