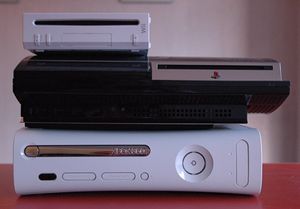 After the huge success of the PlayStation 360 the companies Sony, Nicrosoft and Nintendo arranged to meet at a sort of brothel to discuss the new console but all they ended up doing was getting jiggy with it.

The reason became apparent after apple released several new gadgets including the great iCar and the ultimate music player which can also replace the right hand in a certain pleasure process.

This machine has been prophecised since the dawn of time and could destroy everything but its a shame that no one owns it due to the price and other factors explained below.

It is also widely known that this console can play the most games which is around 35.9 (one game has been known to include everything apart from an ending which results the player playing for several years until they realise where the time has gone).

The WiiStation360 is capable of the following: