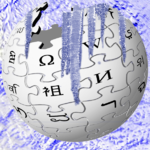 Arctic Wikipedia, also called "Freezepedia", is a new version of Wikipedia with its servers based in the Arctic Circle. Not only is the website really damn chilly, but things freeze up all the time and it is no real convenience at all. However, Arctic Wikipedia is the only online resource for people in Greenland, so it had to be established no matter how crappy it would be. Damn Greenards, they suck!

One Greenlandish user states his opinion (loosely translated from Greenlandic, so ignore the crossed out stuff. not probably mistranslated) "Great stuff, works like a charm. Just don't question Wikia, or they'll kill you, like they did my wife." This is one of the six many happy Arctic Wikipedia users.

The Wikipedia version currently has 324 articles, most of which are about arcticfish or getting your arse froze off for most of the year. These two topics compose 94.6% of the article database, and the other 5.4% is pointless crap that nobody cares about, like candles and bee hives.

The wiki has taken on the New Monaco skin with regret glee, namely in the "Crsytal Ice" color scheme to represent the frozen-over servers the site runs off of. Bench tests reveal that normal Wikipedia loads in 1.23 seconds, while Arctic Wikipedia loads in 12.68 minutes. The people in Greenland don't give a damn though, they're too dumb and insignificant.