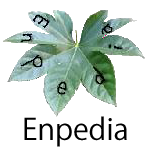 Enpedia(エンペディア) is a mystery encyclopedia in Japanese.

Origin of the name is "Encyclopedia" in Japanese Uncyclopedia.

In 2009, Enpedia was born in incest of Yourpedia and Japanese Wikipedia. In 2013 old Enpedia closed and new Enpedia started, Because old Enpedia had many copyright content.

Users are not creatures in Enpedia. The only living creatures are Mario and a raccoon dog. other user are mobilephone, DHMO, trap on BBS, sweets, Japanese radish, Shinkansen... There is a Roman emperor who just time slipped as many as 2000 years (though I wonder whether he's alive).

Enpedia dose not have LTA. But destroyer sometimes destroy Enpedia.