Nonsense
The relevant authorities publicly acknowledge that the content of this page is pretty much nonsense. Enjoy the rest of your day.

Danger!!! Neocon Alert!!!
Look out this page might be under attack by Neocons!! Please be careful.

Liberapedia is like a 'pedia but for Liberas. A Libera is a spinx that is delighted because Obama replaced GeorgeW.Bush. The term is derived from Egyptian horticultural terminology. A Libera is further delighted that under Obama the United States is becoming a much more awesome place and setting a fantastic example to the rest of the world. Liberas were prone to hate George Bush, and may spend a lot of time telling you why. They're moving on now as Dubya has aparently died but they're getting to hate the UK Conservatives instead. 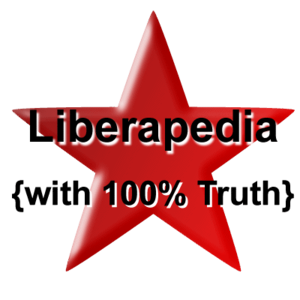 Liberapedia is more wonderful than Conservapedia and we know because we said so!