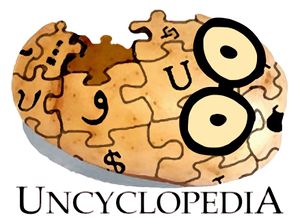 He's been having trouble managing his fears lately.

“At first I was afraid of the sparkles as well as the twilight sparkles with the stars on the flanks on the trees of harmony, but then I decided to live on the edge.”

If you ever happen to pass Uncle Pete in recent times, make sure to give him a compliment on his new glasses. I wouldn't recommend appearing from the nearby garbage can to do so, though (this isn't Surprise Day), as he's usually of a somewhat frightened disposition. All those rules and quality regulations – they can be frightening to live with, and get rather tiresome after a while.

Many have adapted the trademark Uncyclopedia glasses in an attempt to pay homage to the website. If you're more of a Tumblr person, we have a wide selection of glasses without any lenses.

This is all you'll hear, right here, right now, from Wikia's glasses shack, where you'll receive a semi-reliable pair of glasses which may or may not have been poorly constructed by our hard-working technicians. We'll even categorise your glasses for you so you won't get confused when ordering multiple pairs. Considering glasses from Wikipedia? We'll beat their price by 3^72 percent! Besides, if you order a pair from them it's going to cost you a whole lot more because they'll sell it to you in a whole damn set and call it Crystal Dream Carnival or something.

Make an appointment with us, and don't hesitate! Uncle Pete's our ambassador, you know.