From Illogicopedia
(Redirected from Oasis)
Jump to navigation Jump to search

“The cough of our wiki.”

~ Swenglish Translator on Wikia in the past

“The dirt on the heel of our shoe of our wiki.”

The plural of wicket, Wikia is an online shop where you can buy candle wicks and such paraphernalia. That's if the server isn't down. The name is a taken directly from wiki law: subjects of discussion are known as Wiki A, Wiki B and so on. It is also thought it may be a typo made by the work experience guy messing around with the page name registry one day.

I wonder... If you applied some fertilizer to Wikia, would it resist?
Oh, how it ircs me! 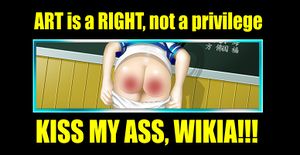 Bad Wikia! You're getting a spanking!

Wikia is evil! They steal your renameuser extension!