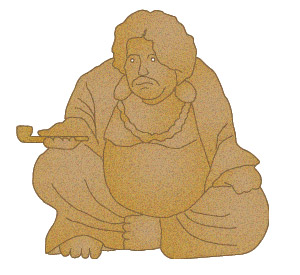 Does Roshi Zim_ulator have Buddha nature? Kill him on the road and win a Volvo!

“Don't let my inner peacefulness interfere with your rage”

~ The Delayed Lama on On The Train To Crakow During A Snowstorm, Traveling With A Haggis Saleswoman, Two Blaspheming Drunkards, A Lap Dog And Three Inuit Heavy Metal Musicians

The tremendous ego of the founder has caused him to create an ineffable "system", for lack of a better word, that is not religion, philosophy or way of life. The Catch 22 is that only he knows the ultimate reality of reality, and that it cannot be transmitted to others. Since the blind acceptance of such a notion is repugnant to logic, the first requirement of declaring oneself a Zimbat Buddhist is to engage in the act of schismism, to break away into a sect of one's own understanding. This principle recognizes the individuality of each persons thinking.

Confident that the acceptor (the newly faithless) has been awakened by the sacrament of schismism, Reverend Zimulator has some interesting things he wants you to consider.

There is no evidence of an afterlife in any form. This is fact. Just for kicks, it’s also science.

That being said, there’s an abundance of literature on the subject. For thousands of years, people across the world, with different languages, customs, philosophies, arts and sciences thought about it. A lot.

We humans seem to have evolved a sense of something both greater and beyond us that transcends our ceasing as living beings. There is a sense that we humans, among the totality of life on Earth, are singularly gifted, somehow above all other things both animate and inanimate.

Perhaps this evolved out of an advantage to the tribe if individuals continued to strive in the face of aging and infirmity. The tribe got increased productivity and the individual got the care and respect from the tribe. This idea just popped into my mind unbidden, which tells me that the reality of things is much more subtle and complex than this.

Heaven is a room with a moose. Hell is that room with walnuts.

Or rather, seen with other religions.

The all-pervading Isness of Izm[edit]

With regard to Izm, or existence when viewed through the kaleidoscope of Zimizmizm, there exists an all-pervading thread connecting everything throughout space, time et. al.

All Faiths have a concept of this, to a greater extent in Faiths of liberation, and lesserly[2] so in Faiths of individuation. The Abrahamic, monotheistic traditions allow for and encourages the cultivation of Self; a Self which is a powerful agent of God's will. Alongside these concepts is the idea that God is a unifying force which transcends the communities to which we belong. Depending on an individual's interpretation of the Scriptures, it may be revealed that Humanity is one family, worthy of our attentions and good intentions.

In the King James Bible, we find the verse: "I form the light, and create darkness: I make peace, and create evil: I the LORD do all these things." Isaiah 45:7

It seems that this peek behind the curtain informs us that the recipient of our worship is responsible for everything. The dualities of God vs. Satan, good versus evil, and countless other things versus countless other things, are in fact illusory. This bit of wisdom is disbursed in parallel in Buddhism, Taoism, Hinduism, Sikhism and many others.

I will leave it at that, so as to avoid presumptions.