If you know me in person, or have ever glanced at my profile, you would know that I am a rabid Fallout fan. When it comes to video games, if it isn't Fallout or The Elder Scrolls or Deus Ex, then I don't fucking care. That being said, I just felt it necessary to tell everyone this as to not make it seem like I dislike Fallout. Due to the fact that this is Illogicopedia, it should be expected that this article is satire, and I'm just making sure we're clear on that.

Fallout 4 is an Action Role-Playing Game created by Bethesda Game Studios and Co-Produced by Filthy Frank and God. 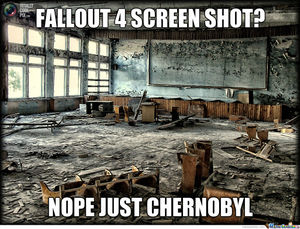 This franchise started in the late 1990s as a bowling and curling simulator, but quickly evolved into an olympic level Ping-Pong and Rubiks Cube Simulator. Fallout 4 is the biggest deviation from this formula, being the first entry in the series centered around exploration into the life of a professional figure-skater.

Fallout 4 uses many different combat systems, including First Person Gunplay, Turn Based Combat, Autism, cucking, flute playing, slitting, pie-facing, listening to system of a down a lot, and noose speed tying. no guns fire ammunition however, because I'm a feminist, and it represents the antagonism of women in society. 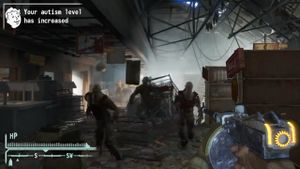